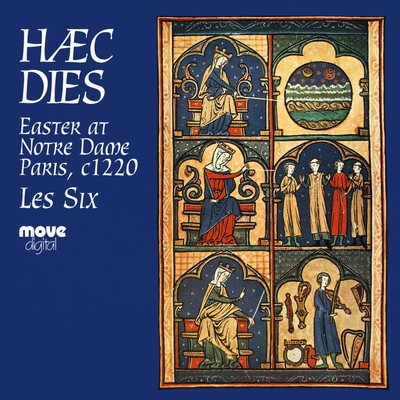 "This programme brings together a collection of music which might have been heard at Mass on Easter Sunday in the second quarter of the thirteenth century in Notre Dame in Paris and other centres of Notre Dame influence. Some of the music is much older: the plainsong Introit, Offertory and Communion belong to the earliest layer of chants in manuscripts from the tenth century, but which have continued to be used for the Easter service right up to our time. Some may be from later in the century, but are found in manuscripts which transmit the central repertoire. Some of the repertoire is international, as the many manuscripts from many countries bear witness. Some of the music is certainly Parisian, and the style of the Notre Dame repertoire gives a cohesiveness to the music which comes down to us in sources from all parts of Europe."

"This recording was prompted by the occasion of the launch of the first volume of the Magnus Liber Organi edited by Edward Roesner and published by Editions de l'Oiseau-Lyre, Monaco."

Taken from the booklet notes by John Stinson.

“The singing by these Melbourne based musicians is exquisite throughout. It is beautifully produced with excellent notes ... haunting and evocative ... Highly recommended.”

“Les Six are a wonderful group of singers ... and they sing the Mass with a beautiful clarity of tone and a moving profundity.”

Hæc Dies is available as as CD. It can be purchased online through Buywell Music or the Australian Music Centre which both offer secure online ordering.