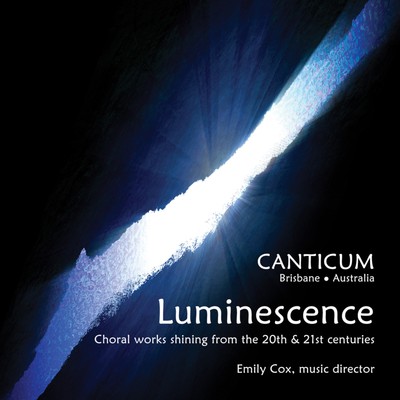 Canticum is directed by Emily Cox, one of Australia's most respected choral conductors and the founding director of Canticum Chamber Choir. The choir is accompanied by Christopher Wrench.

“What you see here is exactly what you get: contemporary choral music from across the world – New Zealand, Estonia, the United States, Latvia, Norway (sort-of), Sweden, and Australia. The choir Canticum itself is new to me although it has been in existence for 21 years; in fact, this CD is a 21st birthday celebration. With founding conductor Emily Cox, the ensemble is currently in residence at St. Mary’s Anglican Church, Kangaroo Point in Brisbane...Cox and her cohorts adopted the over-arching theme of light; in this instance, light generated by sources that need no heat to do their work. This refers, I suppose, to the static nature of scores which, in themselves, have no physical energy. Canticum’s task is to generate the luminous – sometimes, the numinous – by their efforts and, for a good deal of the time, this works. Of the 16 tracks, three contain settings of the Maundy Thursday antiphon Ubi caritas, seven comprise the Magnificat-Antiphons of Arvo Part, another is New Zealander David Hamilton’s version of the Ecce beatam lucem text best known for its 40-part setting by Alessandro Striggio, and Swedish composer Fredrik Sixten uses the chant Veni, veni Emmanuel in his refugee-remembering The Fleeing Child is Jesus to a text by Norwegian poet Emil Skartveit. The remaining six works fall under the general heading of celebrations of nature, or even God-in-nature. In sum, Cox and Canticum have given us an interesting miscellany including some pieces that are pretty familiar to those who have an interest in the field of contemporary choral composition and some rarities, even for the well-informed.”

“Luminescence was recorded to celebrate the 21st birthday of Canticum, a Brisbane–based semi-professional chamber choir. Canticum has performed with the Queensland Symphony Orchestra, Queensland Youth Symphony Orchestra, Queensland Ballet, and at Brisbane Festival, Queensland Music Festival and the last two Brisbane Baroque Festivals. They also sang at the 2005 World Symposium on Choral Music in Kyoto. For this recording, the music director, Emily Cox, who founded the choir in 1995, selected well-established pieces by contemporary Australian, Kiwi, North American and European composers, and also included two recent works composed by members of the choir itself: Phillip Gearing’s Only the Light and Keren Terpstra’s Light, which contribute to the interest of this CD. The magnificent Sieben Magnificat-Antiphonen (1988/-1991) by the Estonian, Arvo Pärt is the centrepiece of the programme – a very challenging work for any choir. Pärt ‘s huge influence on contemporary choral writing is evident in many of the other pieces on the CD too. The oldest work on the disc is the renowned Choose Something Like a Star from 1959 by Randall Thompson (no obvious influence by Pärt here), and the rest are by living composers. American-born Cox studied at Queensland Conservatorium and overseas with noted conductors including Eric Ericson, Frieder Bernius and most recently, Simon Halsey in Berlin. She also conducts the symphonic choir, Brisbane Chorale. All the lyrics refer in some way to light, hence “Luminescence”. Unfortunately the texts and translations are not included in the CD booklet and one needs to visit Canticum’s website to find them (canticum.org.au) – regrettably this has become the new norm with CDs. Cox explained in the CD notes that she also deliberately chose works that exploited the huge range of sonorities that “the choral instrument” (her words) is capable of producing, and the effects are often stunning, as in Stars (2011) by the Latvian Ēriks Ešenvalds, Ecce Beatum Lucem (2012) by David Hamilton and the Pärt Magnificat –Antiphonen (1988/1991). Her selection gives one a taste of how choral traditions have evolved over the past fifty years, especially with regard to the treatment of dissonance. The character of the works is spiritual, and there is a lot of similarity in the choices. I would have enjoyed more variety but perhaps the prayerful effect was deliberate. The performances are all solid if not outstanding. More conviction and emotional connection is needed in the singing, but available rehearsal time can present problems with non-professional choirs and this repertoire is particularly challenging. So though I was never blown away by the sound, I still enjoyed hearing so many recent works well sung on one CD. The intonation suffered in some of the Pärt Antiphons, which would have benefitted from a fuller tone and definitely needed a more fervent expression. The acoustics in St.Peter’s Lutheran College Chapel in Brisbane, where the recording was made, were sympathetic to all but the Pärt. His huge chords become even more amazing in a larger cathedral when they echo through the rests he uses so frequently.

The CD starts with three standards, very well-sung with a warm resonant timbre and confidence: the beautiful Ubi Caritas (2001) by the renowned Ola Gjello (Norwegian) with some excellent unison singing at the start, then Morten Lauridsen’s Sure on this Shining Night (2005) and Ešenvalds’ Stars, which magically evokes the majesty of a star-filled night sky. Tuned glasses and Tibetan bowls as accompaniment add wonderful harmonics to the choral sound. Paul Mealor’s Ubi Caritas, Fredrik Sixten’s The Fleeing Child is Jesus and Ubi Caritas by Joseph Twist are all very satisfying pieces, whilst The Waking of Giselle Wyers is a rather lightweight work by comparison, and the soprano tone was rather thin. David Hamilton’s Ecce Beatum Lucem (2012) by contrast was given a full-throated energetic rendition. The two pieces by the members Gearing and Terpstra, were both well-constructed and attractive and written specifically for Canticum. One looks forward to hearing more of their work. The renowned Brisbane-based organist, Christopher Wrench provides the fine piano accompanying in the Lauridsen, Wyers and Thompson. He has worked closely with Canticum since its inception.”

Luminescence is available as as CD. It can be purchased online through Buywell Music or the Australian Music Centre which both offer secure online ordering.