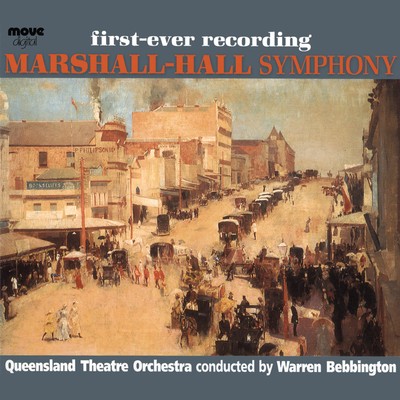 G.W.L. Marshall-Hall (1862-1915) was one of Australia's first composers of significance and was described as a "picturesque and powerful influential personality in Australian intellectual life". He dedicated the 'Symphony in Eb' to his "friends and comrades under the Southern Cross", Streeton and Roberts, whom he often associated with at Heidelberg.

Exuberant and rich in orchestral colour with strong thematic ideas, this lively and passionate music breathes the spirit of romanticism, with its Brahmsian instrumental voicing and Wagnerian wind instrumentation. In this historical, first-ever recording of Marshall-Hall symphonies, Melbourne University Professor of Music Warren Bebbington conducts the Queensland Theatre Orchestra. CD notes include an historical essay about Marshall-Hall by Suzanne Robinson.

“Marshall Hall, a charismatic and eccentric figure who founded (Melbourne's) first orchestra. The lively symphony, reminiscent of Brahms and Schumann, deserves better than its long obscurity, and Bebbington gives a warm and persuasive account, apparently the first since 1907.”

“An excellent glimpse of the music and personality of one of the first significant composers in Australia.”

“The Queensland orchestra displays enthusiasm and provides a guide to the many delights of an eminently enjoyable symphony.”

“The Symphony in E Flat breathes the spirit of romanticism ... the slow movement particularly reflecting the Australian outback.”

“It's all very listenable, and Move Records deserves credit for letting us hear it.”

Marshall-Hall Symphony is available as as CD. It can be purchased online through Buywell Music or the Australian Music Centre which both offer secure online ordering.