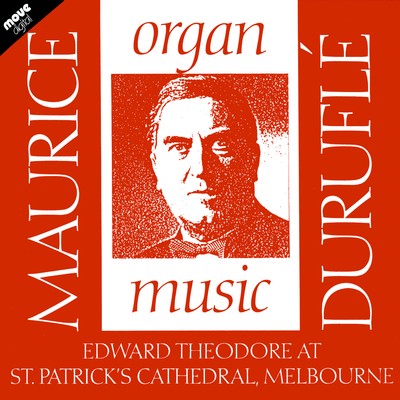 A pupil of Maurice Durufle, Sydney-based organist Edward Theodore has recorded the complete organ works of the renowned French composer and organist on the magnificent organ at St. Patrick's Cathedral, Melbourne. The collection of six works assembled here include the highly praised Prelude, Adagio and Choral Variations on the theme of the 'Veni Creator', Op. 4.

“His playing is technically assured and musically refined throughout ... The recording is excellent.”

“Theodore is well qualified to communicate the composer's distinctive and powerful imagination ...”

“In the discs rendering of complex organ timbres and in the planning, performance and documentation of the project this CD can hold its own anywhere.”

“Edward Theodore ... brings to this disc a prodigious technique, always impeccably applied ... the pleasure of a distinguished interpreter, great music and a living acoustic.”

“stunning playing by a former pupil of the master himself ... the organ sounds fine”

Prélude, Adagio and Chorale Variations on the Theme of the "Veni Creator', Op. 4 Maurice Duruflé

Prélude and Fugue on the Name "Alain", Op. 7 Maurice Duruflé

Maurice Durufle is available as as CD. It can be purchased online through Buywell Music or the Australian Music Centre which both offer secure online ordering.