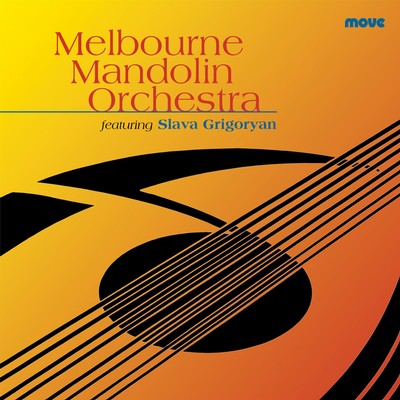 Slava appears as soloist with the Melbourne Mandolin Orchestra on this Move release. Recorded just prior to signing with Sony, Melbourne's own guitar virtuoso is being compared to legendary guitarist John Williams.

This talented young performer joined the Melbourne Mandolin Orchestra at fourteen, and has appeared as soloist on the orchestra's recent tours of Japan and Europe.

The MMO's conductor, Fred Witt, has lead the orchestra since 1991. Respected world-wide as a conductor, composer and performer of plucked music, in 1993 he lead the Melbourne Mandolin Orchestra to win every prize at the First International Mandolin Competition in Belgium including his own composition 'Concertino for mandola' with longstanding orchestra member, Kurt Jensen, as soloist.

Danish-born mandolin player, Jensen, like Grigoryan, began performing professionally at an early age. Appearing as mandolin soloist on this Move release, Kurt has held positions with several European orchestras and is well-known as a presenter on Melbourne's classical radio station 3MBS-FM.

Under the direction of Fred Witt, the Melbourne Mandolin Orchestra perform with a maturity and depth of musicality akin to leading traditional string orchestras.

“tomorrow's virtuoso with today's attitude ... one of the most exciting classical guitarists to have emerged in years”

“We should give warm applause to the Melbourne Mandolin Orchestra for its bravery and talent. It is so brave that it dares to survive strongly in a time when many people still do not treat it fairly. And the Orchestra is so talented that it plays virtuosic music without trouble.”

— Ngoc-Tuan Hoang, State of the Arts

Melbourne Mandolin Orchestra is available as as CD. It can be purchased online through Buywell Music or the Australian Music Centre which both offer secure online ordering.