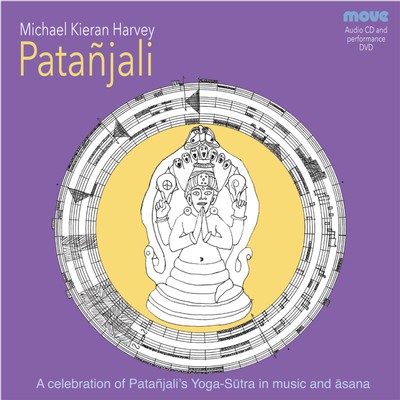 The trio Patañjali (pronounced "Puh-tun-juh-lee" or "Paat-unjali") is a musical interpretation of Patañjali’s classical treatise on the yogic understanding of mind and consciousness, as syncretized in Dr von Caemmerer’s book Pieces of 8 — versions of Patañjali’s Yoga-Sūtra.

A catalogue of yoga āsanas (yoga postures) was performed live by Dr von Caemmerer, his tribute to Yogāchārya Sri BKS Iyengar (1918- 2014). Accompanying these āsanas was a trio of instrumentalists performing the score.

The music does not seek to follow any particular fashion, whether it be a post-modern deconstruction of The Yoga-Sūtra or a faithful transcription of Indian music into a Westernised context, but instead is a personal response to the wealth of ideas and structural inspiration inherent in the texts. The stylistic contrasts within the cycle are therefore deliberately extreme.

The interaction within the work between acoustic and electronic sounds is a metaphor of the dominance of the latter over the former in Western societies, and increasingly in developing societies.

The complete text of The Yoga-Sūtra was used as a template for opening out musical possibilities that may or may not be complete in themselves. This idea reflects the multiple interpretational possibilities of the Sanskrit texts into English as evidenced in Pieces of 8. The proportions of the groupings of the sūtras generate the entire musical parameters of the work, from the opening chords to the closing interference pattern. The approach to interpretation of the texts is of constant variation, in the manner of the “hermeneutic circle”, where interpretation and the music itself are in constant exchange, defying definitive resolution.

Central to the understanding of the Yoga sūtras are the following concepts, grouped in fives, which give the composition its formal skeleton of five movements:

As can be seen, the number five is of deep significance in the taxonomy of qualities according to The Yoga Sūtra. It is perhaps not coincidental that there are five fingers on the human hand, and ten in total. The entire work has a duration of 50 (5x10) minutes, within which the durations of the individual movements 1—4 are in proportion to the structure of the groupings of the sūtras in “Pieces of 8”. The last movement is an ecstatic dance, an active mandala or concluding meditation on the sūtras, which takes the real-time duration of the cycle to a multiple of five (in this case 50 minutes, once short breaks between movements are taken into account).

The āsanas were not choreographed to the music, nor was the music composed with the specific āsanas in mind that were used in the premiere performances. There were practical as well as artistic reasons for this: complete artistic freedom to react to the music was granted to Arjun von Caemmerer as his expertise as a yoga practitioner demanded such respect. Also, avoidance of injury and the question of stamina during the 50-minute work were considerations of high priority. However, the sequence of postures was carefully conceived over many months to coincide with the computer mock-up of the work, hence the precise timings required in performance. If the work is to be performed without the āsanas, then these timing restrictions may be relaxed. The effect of the music with the visual aspect of the āsanas was designed to offset any preconceptions about what an “appropriate” accompanying musical score should sound like. It was hoped that a more surprising and unconventional outcome would ensue with the combination of these disparate elements of a Western “art music” score with the traditional Indian āsanas.

The motivation behind the composition of Patañjali arose from a desire to offer another interpretation of The Yoga-Sūtra, framing the ancient text within the Western art-music tradition. The structure of The Yoga- Sūtra therefore became re-interpreted as a purely instrumental musical structure. This response was in the manner of the hermeneutic circle, as expressed in fragment 181 of Nietzsche's The Will to Power (1901), where the ‘positivism which halts at phenomena’ is refuted in the proclamation: ‘No, facts is precisely what there is not, only interpretations.’

Music therefore becomes another method of interpretation of these texts, at once looking at the whole 196 sūtras in their translated forms as the book Pieces of 8, through the various four pādas or chapters, down to the individual sūtras, and even further (in movement two) to the level of the individual syllables of the sūtras.

The CD is an edit and re-mix from two live performances in Hobart, January 2015. The DVD is one of those performances complete. This is a double-disc for the price of one disc.

“I highly recommend the Move Records CD/DVD Patañjali a celebration of Patañjali's Yoga-Sūtra in music and āsana, composed by Michael Kieran Harvey with yoga āsana performed by Arjun von Caemmerer.

The composition, a musical translation of Patañjali's Yoga-Sūtra, premiered in Hobart in January 2015 as part of MONA FOMA (Museum of Old and New Art, Festival of Music and Art). The five movements of the music were complemented with Arjun's personal tribute to Yogāchārya Sri BKS Iyengar in his 5-part 50-minute āsana demonstration.

The āsana demonstration is beautifully executed and captures the essence of Iyengar Yoga. It displays an artistic sequence of yoga āsana and a creative use of props representing some of the main concepts of Iyengar Yoga. Michael Kieran Harvey’s music is an interesting and personal interpretation of The Yoga-Sūtra. He deliberately makes use of extreme contrasts for his musical trio who perform the score. The music together with the āsana demonstration produces a powerful performance. The performance succeeds in presenting a ‘surprising and unconventional outcome’ combining these disparate elements of a Western art music score with the traditional Indian āsana.

The whole collaboration is joyous and inspiring: the participants describe their project as a labour of love and this recording definitely succeeds in demonstrating this.”

Patañjali is available as as CD. It can be purchased online through Buywell Music or the Australian Music Centre which both offer secure online ordering.