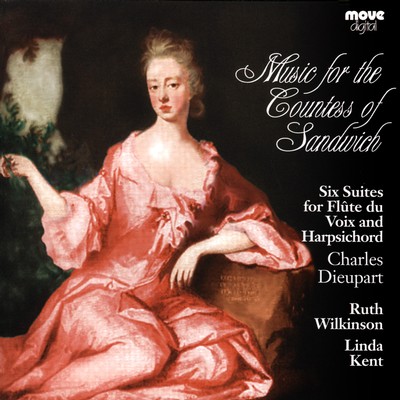 Two of Australia's leading early music specialists – together on one disc – perform exquisite music of the French Baroque. The first Australian release of the complete suites for 'voice-flute' composed by Charles Dieupart.

In 1701 Dieupart dedicated these works to Elizabeth, Countess of Sandwich, daughter of the Earl of Rochester who had been sent to France for her health, and became Dieupart's harpsichord pupil.

Two versions of the Suites were published simultaneously; one for solo harpsichord the other with parts for violin or flute, and continuo (ie harpsichord). The fifth and sixth suites are presented on Music for the Countess of Sandwich as solo harpsichord versions. The opening of J. S. Bach's English Suite is 'borrowed' from Dieupart's Premier Suite from this collection.

A rare opportunity to experience the unusual, haunting colours of the 'voice flute'.

“... the playing on this disc shows a thorough understanding of the the performance style of the day.”

“... early music specialists Ruth Wilkinson and Linda Kent (perform these) pleasing and witty works ... (they) are light and deft, clearly at home in the idiom.”

“It is the unusual, elusive quality of (the voice flute) ... which I find entices one to listen to this recording over and over again.”

Music for the Countess of Sandwich is available as as CD. It can be purchased online through Buywell Music or the Australian Music Centre which both offer secure online ordering.