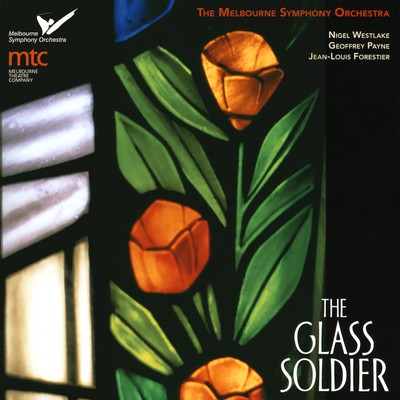 The music from the Melbourne Theatre Company's production is performed by the Melbourne Symphony Orchestra and conducted by Jean-Louis Forestier. Magnificent trumpeter Geoffrey Payne is featured in other tracks. This rich and vibrant music, featuring the world premiere recording of The Glass Soldier Suite composed by Nigel Westlake, exhibits the wonder, tragedy, love and resolution of WW1 stretcher bearer, NH Ferguson.

This album is a spiritual reflection in music of the journey of the Australian soldiers who fought in the Great War. This is expressed through the life of one soldier in particular, Private Nelson Ferguson, an Australian from Ballarat. Ferguson’s story is just one of thousands arising from the Great War. But it tells us all about the horrific nature of war, about adversity through disability, and about the triumph of endurance, courage, and love.

Private Ferguson was a stretcher bearer in the 15th Field Ambulance Corp and served in France between 1915 and 1918. Ferguson was blinded by mustard gas during battle at Villers-Bretonneux, a small town north of France. The battle, climaxing on ANZAC day, 25 April 1918, turned the tide of the War on the Western Front.

Despite his disability from war, Ferguson returned to teach art in Victoria after the war. In 1968 he received a corneal transplant and his vision was returned to him.

Ferguson’s life is now a play written by Hannie Rayson, entitled The Glass Soldier, recently performed by the Melbourne Theatre Company. The play traces Ferguson’s challenged life, his love for his beautiful wife, Madeleine, and his journey towards the light.

In early 2007 some of the members of the Melbourne Symphony Orchestra visited Villers-Bretonneux and paid homage to the ANZACs. They were there to remember and give respect to Australian soldiers, and in particular, two great uncles of principal trumpet, Geoffrey Payne, and the grandfather of another trumpet player, David Farrands.

The orchestral piece on this album, entitled the Glass Soldier Suite, has been composed by Nigel Westlake and is recorded by the Melbourne Symphony Orchestra. The orchestral suite, like the play, exhibits the wonder, tragedy, love and resolution of Ferguson’s life. It is a beautiful work by one of Australia’s most gifted and respected composers.

The Brass Ensemble on this album is comprised of some of Australia’s leading brass players. It features, amongst others, the trumpet of Geoffrey Payne. On one of the tracks, Payne performs on Private Ferguson’s 1905 cornet. The Ensemble recently performed at the Shrine of Remembrance, Melbourne, on Remembrance Day (11 November each year).

This album is a musical tribute to the courage of the ANZACs in the Great War.

“Nigel Westlake's considerable music score is typical of the composer's output, with quotes from familiar melodies tinged with the sonorities of American pastoralism. It's written like a film score, and used that way too, pushing the audience's emotions this way and that in crucial scenes.”

The Glass Soldier is available as as CD. It can be purchased online through Buywell Music or the Australian Music Centre which both offer secure online ordering.