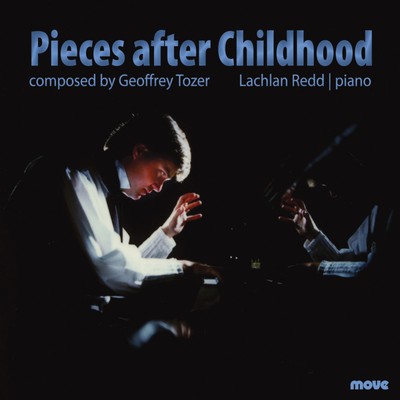 The growth in musical maturity and originality is evident in these works, as is the influence of Tozer’s travels, study and performances both in Australia and overseas. The maturity of Tozer, the musician was apparent at a very early age, but unknown as a composer, who was in ‘hibernation’ while the concert artist blossomed and succumbed to the demands of an international career. Fortunately, Tozer did on occasion, commit his music to paper and we can now share what he had to say through his own music.

Tozer had a life-long fascination with counterpoint. This is clear in the Two Part Inventions, the Fugues composed for his Citrus Suite and more especially in the Fugue in C# written for the Tchaikovsky Competition in Moscow in 1978. The Fugue and the Prelude (also in C#) takes the listener and any performer with the technical skills necessary to play it, (a stretch of least a 10th in the left hand is pre-requisite) on a contrapuntal and harmonic journey of intrigue and excitement, as it weaves the four voices throughout the entire range of the keyboard. The Prelude with its score demanding one complete system per bar could attract the same idiosyncratic criticism as Mozart’s music: “too many notes”. Tozer’s Prelude is even more virtuosic than the Fugue, and like many works of Nikolai Medtner, who Tozer championed, it is relentless from the first bar to the last in the full five minutes and forty seconds its performance requires.

The Sonata in C, the last of his nine piano sonatas, in my opinion, is the most inspiring and appealing. It begins with an unforgettable melody that should be dedicated to Mozart, for its simplicity and beauty and for the way Tozer develops and ornaments it. In the three movements of the Sonata, one hears the journey Tozer has made both harmonically and melodically – sometimes quite predictable, but often unexpected and unique in the twists and turns it takes.

Tozer is revealed as a more mature, unique, eclectic composer in the soul-searching Heimweh composed in Jerusalem in 1978, draws us into some of the pain he has already felt and is yet to confront; Reuben is more of a light-hearted joke, a musical evocation of Reuben Fineberg, the Jewish impressario who was to influence and guide much of Tozer’s life and performing career right up to Fineberg’s death in October 1996. The Arpeggionata and Suite for Ben were written during Tozer’s extraordinary sojourn as a part-time music teacher in Canberra in 1988. Tozer composed Arpeggionata to express to teenage schoolboys the sheer joy and brilliance of playing arpeggios all over the piano. He composed Suite for Ben as a lovely tribute to his own musical hero Benjamin Britten, whom he met and by whom he had been mentored when he himself was a teenager.

Lachlan Redd, is the first pianist to perform these pieces and fortunately has a span of a tenth!

Pieces after Childhood is available as as CD. It can be purchased online through Buywell Music or the Australian Music Centre which both offer secure online ordering.