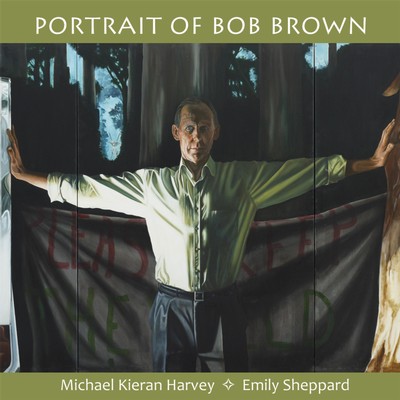 The idea for this CD originated in the concert launch of Arjun von Caemmerer’s Vice Versa new & selected poems (Collective Effort Press, 2016) on 9 October 2016 at the Tasmanian Conservatorium. Michael Kieran Harvey premiered his Portrait of Bob Brown (2016), an especially appropriate choice given Michael’s, Arjun’s and violinist Emily Sheppard’s mutual high regard for the man and his extraordinary work.

Also featured at this concert (and thus included on this recording), were Emily’s solo piece for viola and voice, Aftermath (2016), inspired by her visit to Tasmania’s threatened Tarkine region, and the premiere of Harvey’s piano/violin version of Homage to Liszt (2016), re-written especially for Emily’s unique artistic capability.

“Bob Brown is renowned for his single-minded dedication to environmental causes and this collaboration between Tasmanian-based pianist Michael Kieran Harvey and violinist Emily Sheppard is a very personal tribute to, as Harvey puts it, “a lifelong courageous warrior.” It comprises three new Australian works: two by Harvey for piano and violin, and one by Sheppard for viola and voice.

Harvey’s Portrait of Bob Brown is restlessly percussive and typical of the thumping virtuosity that characterises Harvey’s pianism, interwoven here with sinewy violin. Harvey explains that it “reflects on the turbulent, courageous and serene complexities of Brown’s life through the resonances of a piano and violin narrative.” His Homage to Liszt is a similarly robust workout for piano and violin (reworked from the original arrangement for piano and percussion), with occasional splashes of Romantic lyricism breaking through the chordal walls.

Sheppard is an occasional member of the ACO, and the respect and musical understanding between the two performers is palpable. Aftermath, inspired by a visit to a burned-out area of Tarkine in North-Western Tasmania, is characterised by spacious, open viola lines augmented by occasional wordless voice, further enhanced by a generous reverberant sonic. This dramatic but contemplative landscape is an appropriate tribute and all proceeds are to be donated to Brown’s wilderness protection foundation.” ★★★★

“Portrait of Bob Brown gives equal billing to violin and piano, not exactly asking for stamina, although the piece contains a few active bouts, but more an ability to negotiate smoothly a sequence of about five segments, the task made a touch more difficult as the work contains two significant pauses – changes of gear but not suggestive of discrete movements. In fact, the score sounds like a rhapsody, the spirit taking the listener where it wills. If you’re concerned that Harvey is proposing a kind of chamber-scale Heldenleben in which we follow Brown’s spiritual development from Oberon to Cygnet, fear not: the soundscape of this Portrait is non-specific, essentially abstract, non-alliterative and suggestive of a consistent personality rather than a psychological pilgrimage.

Sheppard’s work is a lament. Its language is unrelievedly minor, even when the composer/executant is playing Major 3rds. The progress of Aftermath sounds improvised, as though Sheppard is following a pattern as far as she wants to, then moves into another emotionally similar path. At a few points, she sings a wordless consonantial fragment above her instrumental accompaniment which itself takes on various shapes throughout the score’s length: repeated arpeggio patterns, orthodox pizzicato and the left-hand variety, two-string unisons, harmonics, trills. Sheppard says the work came into existence at Sarah Anne Rocks on the Tasmanian west coast, ravaged by bushfire in January 2016. Even for those of us who don’t know the area, Aftermath suggests loss and grief, and with a strangely Celtic tinge.

Harvey’s Homage to Liszt is better known – well, to me – as a duet for piano and percussion, shorter than this arrangement. In four parts, it takes on the Hungarian composer’s ‘look’, following a varied path of emotional sympathy though a ballade, a waltz, a csardas and that form intimately associated with the composer’s popular face, a Consolation. Harvey takes Lisztian tropes along with direct quotes and creates a formidable edifice; a small prelude suggesting Brubeck in animated mode leads into a Romantically swirling ballade before the waltz’s re-visiting of one of the Transcendental Studies, the brilliantly parodic Hungarian dance that manages to raise the spectre of Bartok as well as mirroring Liszt’s exciting rapid scale-work across the instrument’s complete range, before a token nocturne with a 12-tone melody finishes the piece, reminding us of the composer’s final experimental works where traditional harmony was dissolving.

Sheppard’s contribution matches Harvey in enthusiasm and the track is a splendid collaboration where neither performer puts a foot wrong, the many synchronous passages exciting to experience. For all that, I can’t think what it has to do with Bob Brown, except as a an enthusiastic salute to a character that most us would probably remember, if unfairly, as something of a sobersides.

The proceeds from this CD are being donated to the Bob Brown Foundation, an organization dedicated to ‘action with a vision to protect Australia’s wild and scenic natural places of ecological and global significance.’ It’s hard to think of a cause more worthwhile in these shameful days when the Great Barrier Reef is being killed off under our eyes and Brown’s successors are ignoring any environmental danger-signs yet wasting their energy in schoolyard squabbles.”

“Bob Brown is a complex human who is adept in so many areas it makes most seem, at best, laconic. Harvey captures this complexity in his Portrait of Bob Brown. He has, in many regards, a similar work ethic to Brown and his compositions also reflect his own virtuosity and complexity and his inability to sit still whilst someone, somewhere, is letting all hell break loose. It is not surprising then that utter determination is the overriding vista of this piece. There are also, particularly in the violin part, elements of frustration.
The piece opens with long, deep resolute notes on piano and the juxtaposition of a highly pitched melody on violin, combining then, presence and strength with sensitivity and empathy. And there we have it – these seeming dichotomies that are the essence of Bob Brown. They gradually merge with momentum and dynamics gathering to the point where the rapid-fire short melodic sequences on violin are replicated on piano in parts. They diverge, they unite but the frenetic activity shows a person who will act, no matter the obstacles, for what he believes in. A persistent, deep, relentless marking of time drones in the bass while a mournful melody plays out on violin; the answered call to resistance. Throughout we share in this emphatic, still, corporeal presence with a mind spinning with ideas and strategic plans. And one imagines the stands that Brown has taken on so many issues. There is even a sense of jubilation in the aftermath of this passage, a jazzy letting go, an exuberance, for those moments in time when there is a general human awakening to an issue of injustice brought on through the type of exposure Brown is renowned for. The ‘coda’ is a beautiful etching of compassion, reflection, a tiny touch of humour and a depiction of Brown’s immersion in all those pursuits that sustain his intrigue with his surrounds and, well, life, those aspects constantly feeding his desire to protect it for others. There is a sense of homage at the end, where ‘the written about’ seems to become ‘the written for’ as Sheppard and Harvey unite in a rich, and warm pronouncement of admiration. And one must add that the playing of Harvey and Sheppard is so kinetically, musically connected.

Emily Sheppard is a violinist, violist and composer. She has an equal passion for the environment and is interested in where these two worlds might meet. Her evocative Aftermath is for viola and voice (hers) and is largely an improvised response to the aftermath of the fires that ravished areas of Tarkine in the north west of Tasmania last year. It is an exquisite, haunting piece that explores resonance, space, consonance, intricate tone colours, fixed points and movements to and from them. It is measured, taking everything in and gradually there is a bending of notes, both stringed and vocal. Sheppard attends to the detail of sound, every sound, and exploits her most capable skills in ensuring the harmonies and textures she seeks depict the immenseness of the scene she is witnessing. Her playing is quite stunning. There are places one visits, places that are so awesome, so vast, that one understands the miniscule nature of an individual existence, but, at the same time, one’s place, one’s importance, however ephemeral, in the scheme of it all. This then, is what is expressed in this gorgeous piece of music, and as such, connects it perfectly to the intent of the entire project. That it is improvised is so fitting. As the natural surrounds she engages with, the ecosystem alters from one minute to the next, so her response will never be the same.

Homage to Liszt was originally written for piano and percussion. Harvey sees similarities between Brown and Liszt, in their philanthropy, their willingness to push for the rights of others. But one can also understand Harvey’s inspiration from the virtuosic Liszt. The piece is so different to Portrait of Bob Brown, which shows great insight into the individual characters of both. And so although Harvey’s own voice is highly articulate in these compositions, it never overtakes the characteristics of those he is writing about. In many ways it is an act of humility. Harvey’s extraordinary playing is, of course, showcased here. Indeed the scale passages are so beautifully executed one is in ‘blissland’. He has enormous fun with this piece. There is the same incredible sense of dynamism, and some fabulous jazzy, rhythmically charged sections, and humorous takes on some of the, at times, over the top romanticism of the charismatic Liszt. Sheppard is a perfect partner here, showcasing her own virtuosity and again, the pairing of the two works so well. The ghostly ending is fitting for a man who had an extraordinarily varied existence with the gods at various junctures seeming to laud then condemn. Liszt’s ‘ups’ in life were largely of his own making, his own fortitude and his giving nature and there we have the similarities with Brown.

This is a wonderfully unified project in every possible way, and a musical treat.”

Portrait of Bob Brown is available as as CD. It can be purchased online through Buywell Music or the Australian Music Centre which both offer secure online ordering.