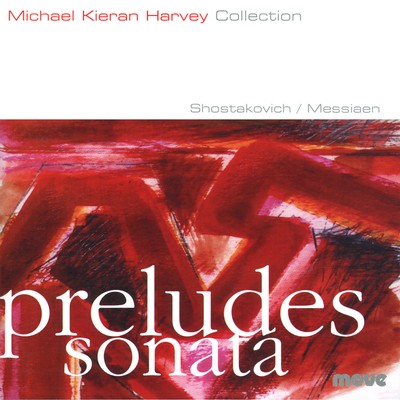 Preludes and Sonata of Messiaen and Shostakovich

Michael Kieran Harvey, piano. Olivier Messiaen (1908-1992) and Dmitri Shostakovich (1906-1975) were two of the greatest composers of the twentieth century. Both were remarkable in that they discovered their own unique and distinctive creative voice when they were in their teens.

Both were also inspired by one of the two great 'religions' of the twentieth century, Catholicism and Communism respectively. Messiaen was a devout Catholic and his spirituality is a fundamental element of almost his entire creative output.

Shostakovich, three times a recipient of the Order of Lenin, was regarded as a champion of Communism. When I heard the wonderful pianist Ayako Uehara perform the breathtakingly difficult Shostakovich Sonata during the 2000 Sydney International Piano Competition, I realised why I hadn't heard it live before, and also that I had to perform it. (It also stung me that as so often happens in competitions Ms Uehara's obvious imagination, creativity and daring went unrewarded, and as official ABC Classic FM commentator I said as much at the time).

The important point to remember about this type of work is that the music only makes sense when one is playing in extremis, and makes a nonsense of the careful roboticism trotted out for so much classical music performance. Shostakovitch's message is urgent and raw, overflowing with intelligence and outrage. He himself played the work, which speaks volumes of his own pianistic prowess and recklessness, and it is very hard to imagine him pulling any punches in performance.

Indeed, criticism of his playing concerns his "excitability", hardly something one can hold against him given the passionate material being dispatched. The enthusiasm of discovery, of finding a 12-tone system (all notes of the row are used in the first bar, just as in the Boulez 2nd sonata [1948]) to free his imagination stands as contrast with the obvious tonal gloom and irony of his later works. Hints of this ironic gloom and code - a result of charges of "formalism" directed at him and others by the detestable Union of Composers - are just discernibly emerging I think in the preludes.

“One of the most rewarding piano discs of the year”

“As we've com to expect, Michael Kieran Harvey's performances of all these works are astounding ... Highly recommended”

Preludes and Sonata of Messiaen and Shostakovich is available for download from the iTunes Music Store.
It's available for streaming through Apple Music.

Preludes and Sonata of Messiaen and Shostakovich is available as as CD. It can be purchased online through Buywell Music or the Australian Music Centre which both offer secure online ordering.