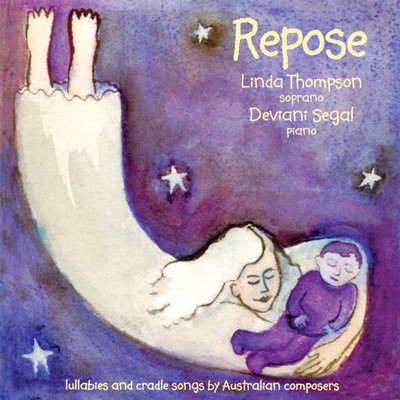 Based on the artists' own painstaking manuscript research, this CD juxtaposes rarely heard historical works by Elsa Marshall-Hall, Florence Ewart, Dulcie Holland with the more recent efforts of Linda Kouvaras and Stuart Greenbaum.

Melbourne-based pianist and teacher, Deviani Segal has performed a wide range of music as both soloist and accompanist.

Linda Thompson won many prestigious competitions including the Herald Sun Aria in 1990, and subsequently studied in London, Germany, Italy and Holland. She was a member of the Young Artists Programs of both the Victoria State Opera and The Australian Opera and has performed many major roles.

Elsa Marshall-Hall was born in Melbourne in 1891 to GWL Marshall-Hall and his first wife May Hunt. Her manuscripts are held in the Grainger Museum.

Peggy Glanville-Hicks was born in Melbourne, studying in London, Vienna and Paris. Her activities on behalf of contemporary music and musicians were extraordinary. She returned to Australia in the 1970s, and in her will established a fund and residency for young Australian musicians at her house in Paddington.

Australian composer Eric Gross' philosophy involves writing music that will firstly convince its performers before it can convince its audience.

Wendy Morrissey was involved in the musical life of various Victorian schools after gaining Bachelor of Music (Melb) in violin.

Alfred Hill spent most of his early life in New Zealand and made a significant contribution to the study of the indiginous musics of the Maoris and Australian Aborigines.

Dulcie Holland is a prolific composer of many genres and has made a significant contribution to Australian music education through her theory textbooks.

May Brahe acheived remarkable success in that more than 290 of her 500 or so songs were published. She was the only Australian woman composer to win both local and international recognition before WW2.

Linda Phillips has concentrated on writing music for small forces with song-writing her main focus. Her commitment to music through journalism, adjudicating, teaching, performing and composing was recognised with the OBE in 1975.

Florence Ewart composed over 60 works in many genres including 5 operas. She saw to it that most of her smaller works were performed, although she received very little professional encouragement and found it more difficult to get performances of her larger works.

Edith Harrhy composed under a number of pseudonyms, and although renowned in her lifetime, was not recognised accordingly in historic records.

Mirrie Hill composed in many genres, her favourite being orchestral music. Several works took their inspiration from Aboriginal themes and rhythms including Little Babe of Arnhem Land.

Repose is available as as CD. It can be purchased online through Buywell Music or the Australian Music Centre which both offer secure online ordering.