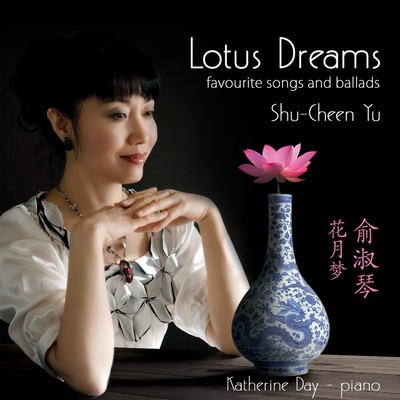 Shu-Cheen's love affair with art songs started at very early age. She was born into a musical family and both of her parents were involved with local opera companies in Shanxi Province. Her father was a fine musician. He was broadminded and he wanted her to learn Western music notations and solfege (do-re-mi...) to expose her to different music styles.

Some of the first Western songs Shu-Cheen heard were Brahms’ Lullaby, Schubert’s An Die Musik (Ode to Music) and Danny Boy, the Irish air. During the Cultural Revolution period, Western music was banned in China. But these peaceful, haunting and beautiful tunes stayed with her always.
After the Cultural Revolution, following her graduation from Shanxi Province Conservatorium of Music in Peking Opera Art & Performance, Shu-Cheen became a Chinese and Oriental folk song specialist.

She was a principle artist with the prestigious China National Oriental Song and Dance Company and was widely regarded as one of the best folk singers in China. As a result She performed regularly on China’s top radio and TV programs. In addition Shu-Cheen entertained visiting Heads of State and foreign dignitaries.

Whilst she was very busy with Oriental folk music, the haunting tunes of Western art songs were never far from her. They keep appearing in her head from here and there, now and then. They were like a lovely neighbour: she would hear them occasionally but I did not live with them.

In 1987, Shu-Cheen came to Australia and finally had the wonderful privilege of learning Western style of singing at the Opera Studio of Sydney University. The rest is history. The beautiful songs on this CD are a reflection to her artistic journey. They have all played an important part in her life.

Through music like this we celebrate humanity and the great world cultural heritage that we enjoy. We are fortunate indeed to have such a breadth of musical activities to appreciate and experience so freely today.

“The trouble with this one is that once I had started playing it. I could not find anywhere to stop without running it right through and starting again. The reason being that all 18 songs sound too good to want to cut any of them off. They represent Shu-cheen Yu’s own pick out of the world of songs and ballads, ranging in length from Franz Schubert’s Die Vögel (The Bird) up to Mozart’s Ridente La Calma (Smiling Calmness is My Essence). Chinese Folk Song are presented by The Gentle Flowing Brook, and to cut a long story shorter than it deserves, there is also Mendelssohn’s On Wings of Song, Richard Strauss’ Dedication, Scarlatti’s The Violets, and Danny Boy. Not a dud track anywhere, and a Simply exquisite treatment that has to be heard all the way through. An edge of maturity in this singer’s voice that every note sounds full and clear, even the highest register. The only technical enhancement comes in the form of an occasional touch of double tracking, the piano always remaining respectfully muted. The cover picture is as close as it comes to anything explicitly oriental. You would hardly expect Shu-Cheen Yu to select anything that she was not comfortable with, so there are no sign of her being daring, which is why I kept half a star off the full set of five that is otherwise thoroughly deserved. No question that this is beautifully done, and quite irresistible. - Phil Vendy” ★★★★½

Lotus Dreams is available as as CD. It can be purchased online through Buywell Music or the Australian Music Centre which both offer secure online ordering.