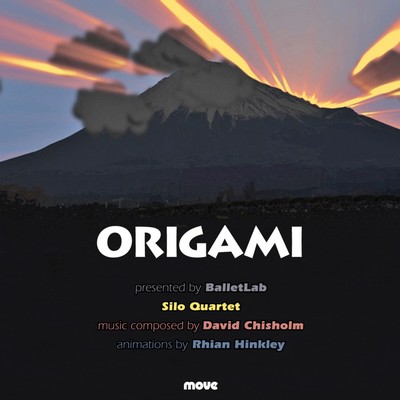 The ancient art of Japanese paper folding, origami, is the title for and inspiration behind this new dance performance by artistic director, choreographer and founder of Ballet Lab, Philip Adams. The music for this production was composed by David Chisholm, and performed by the Silo Quartet.

The work was performed at the Sydney Opera House in August and there were plans to stage it in San Francisco in 2008.

"Origami explores the possible dialogue between dance, visual art, and choreographic design. The starting point for David Chisholm's music for Origami is the European grouping of the string quartet. The structure of the music is built as if opening up one giant fold, like a reverse origami, flattening out the memory of the paper, not to erase it, but to create a place from whence it is possible to begin again."

“David Chisholm's accompanying score ranges from luscious to dissonant, played mostly by a string quartet with a strong Japanese flavour.”

“the original music of composer David Chisholm played by a stringed quartet over synthesised sounds is quite riveting. The score's often dissonant tone commands attention and enhances the pieces being performed.”

Origami is available as as CD. It can be purchased online through Buywell Music or the Australian Music Centre which both offer secure online ordering.