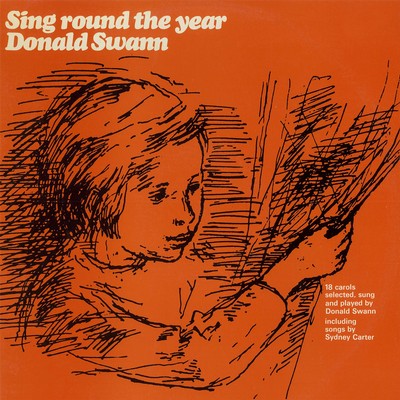 “The songs on this record represent the sum of my musical wanderings in this uncertain field of the carol,” says Donald. “Because of the latitude I have allowed myself, two canticles, a spiritual, a hymn, and a round augment the list, which are, in their various moods of worship and praise, as good as the several songs of Sydney Carter which he himself describes as songs, ballads or carols.”

Some of the 'carols' are sung by the boys of Westminster School and the girls of Mayfield School, Putney with Donald Swann's superb piano accompaniment. Others feature organist Nicholas Jackson. Donald Swann sings and plays on others. It was recorded in St Mark's Church in the West End of London in 1968.

This simple animation was made in 1972 at the time of Sydney Carter's Australian tour.

Donald Ibrahím Swann (30 September 1923 – 23 March 1994) was a British composer, musician and entertainer. He is best known to the general public for his partnership of writing and performing comic songs with Michael Flanders (a.k.a. Flanders and Swann).

“…A charming record, one which would be appreciated by young people interested in church activities.”

“Swann's carols… are peculiarly Swann-ish, crisp, right on target in their thrust of meaning, and witty to boot. He is aided in many by the excellent children's voices of the boys of the Westminster School, and the girls of Mayfield School, Putney…
…There is much variety in the actual performances. Swann solos occur, but there are unaccompanied choruses, a girls' chorus with triangle and piano, boys' chorus with guitars and double bass, and so on...”

“…The music is bright and tuneful, yet has more quality and depth than much of to-day's "modern" church music. The 18 songs are ideal for choirs (including those which whistle), congregations and children, but are specially suitable for apply listening in your own home...”

Sing round the year is available as as CD. It can be purchased online through Buywell Music or the Australian Music Centre which both offer secure online ordering.