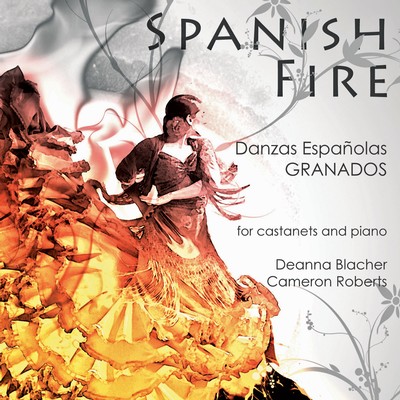 The set (originally for solo piano) are among Granados' most popular and best-loved works (including No.4, Villanesca, and No.5, Andaluza), and fuse earthy dance with European salon charm. Here, the version for piano and castanets highlights the rhythmic energy of the dance whilst providing a nostalgic coloration to its more intimate moments.

“To hear Blacher interpret the melody and occasionally accompaniment in that main part, whether in the lively outer sections of dances such as the opening Galante and the Fandango, Andaluza and Romantica or the more reflective middle sections of the same, as Roberts played the piano originals, was a revelation […] Cameron’s vital, exuberant pianism was simply electrifying”

“an explosion of emotive sound… an incomparably sensitive pianoforte partnership… two artists of supreme talent left and indelible mark and set a new standard in this medium.”

— Review of a live performance, OZartsreview

Spanish Fire - Danzas Españolas is available as as CD. It can be purchased online through Buywell Music or the Australian Music Centre which both offer secure online ordering.