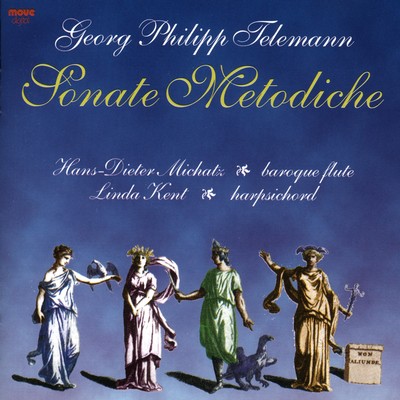 When the "Sonate Metodiche" were published in 1728, Georg Philipp Telemann was at the peak of his career. Securely employed by the city of Hamburg as Cantor and Director Musices, he had left behind the limitations of the responsibility towards a single sovereign, and was catering for a more open, 'democratic' musical public.

Publications of his music were often followed by a second volume suggesting their popularity with musical amateurs as well as professionals, including the 'Methodical Sonatas' (in 1732).

It is surprising that the Methodical Sonatas have not yet become part of the mainstream repertoire, and the number of recordings is relatively small compared to similar repertoire. After all, they are rather large-scale works, extremely varied and full of the most inspired writing known from this period. Perhaps the title is slightly prohibitive in our time, when 'method' might too easily become associated with ' arid, constructed or uninspired'. However, nothing is further from the truth. The title refers as much to the care that has gone into the composition of the two sets of six Sonatas, as it points to the examples of high baroque ornamentation practices (which Telemann provides for each of the slow first movements).

As the acoustics in the recording venue were quite live - similar to what we can expect from a larger Baroque music room - the two instruments come across as equal partners rather than solo and accompaniment, which also reflects the intention to use as little technical manipulation as possible.

“One of the most delightful CDs I have come across this year.”

“Now if you really want to outdo your friends with a stunningly unique CD collection, then you need to get a copy of this.”

“These elegant sonatas showcase some of the most beautiful examples of Goerg Philipp Telemann's artistry, and are exceptionally realised by Michatz and Kent.”

Telemann - Sonate Metodiche is available as as CD. It can be purchased online through Buywell Music or the Australian Music Centre which both offer secure online ordering.