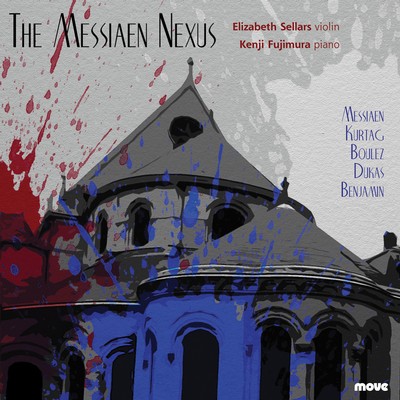 Dr Kenji Fujimura (piano) is a multi- award-winning pianist and composer, with many broadcasts on ABC-FM/TV, MBS-FM, BBC Radio3 and Bravo!Canada to his credit. Concert, masterclass, and adjudication engagements have taken Kenji throughout Europe, North America, Asia and Australasia.

“This disc should be praised as much for thoughtful programming as for musicianship.
Sellars and Fujimura focus on chamber works for violin and piano deriving their inspiration from the Paris Conservatoire under Messiaen's period of tutelage.” ★★★★

“Sellars and Fujimura have created a most entrancing and expressive rendition of these technically advanced and challenging works for violin and piano. Even though Messiaen is only represented in two of the 14 tracks, the title of the disc refers to his relationship and influence on the other composers in the period of the Paris Conservatoire - as a teacher of pupil. Benjamin, Dukas, Kurtág and Boulez's works are modern yet differ vastly in their style. The pieces selected comprise works for solo violin in their style, The pieces selected comprise works for solo violin as well as violin pieces accompanied by piano. The virtuosity of these accomplished performers is displayed as well as their ensemble skills. Each work draws the listener in on an emotional journey although the sounds are at first new and foreign. Through their intellectualism and stylistic mastery, these eclectic works are very satisfying to listen to, and music which one would want to hear again.”

The Messiaen Nexus is available as as CD. It can be purchased online through Buywell Music or the Australian Music Centre which both offer secure online ordering.