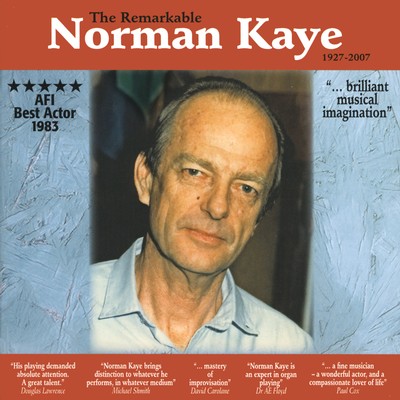 Move Records has gathered together 30 tracks for this CD which pays tribute to the remarkable Norman Kaye. The main focus here is on the musician and organist, but not forgetting his acting career. Norman was born on 17 January 1927 and died on 28 May 2007.

Norman was not only a well known and highly regarded actor, winning the 1983 AFI best actor award, but he was also an exceptional organist. Having studied under Melbourne's legendary Dr AE Floyd, Norman went on to Study with Pierre Cochereau the organist of Notre Dame de Paris.

This recording comes from a wide variety of historical sources, from a recital on the Melbourne Town Hall organ (with an introduction by Dr Floyd himself) all the way through to 1997 when he gave the final recital on the JE Dodd organ which until that year resided in the Trinity College Chapel, Melbourne. This disc includes compositions by Norman, examples of him as accompanist and several excellent improvisations.

Produced to celebrate the life of the remarkable Norman Kaye, this recording is also an opportunity to hear several of Melbourne's organs that have now either been lost, or dramatically altered, such as the Melbourne Town Hall organ in it's original 1929 form (before it was greatly enlarged and altered in 1999-2000), and the organs of Caulfield Grammar Memorial Hall (destroyed by fire in 2000), and Scotch College's Littlejohn Chapel organ which was removed in 1993 to make way for an electronic organ.

“This CD is a welcome tribute to a remarkable Australian”

“The playing is just fascinating, technically sound and utterly musical as one would expect . . . Warmly recommended”

The Remarkable Norman Kaye is available as as CD. It can be purchased online through Buywell Music or the Australian Music Centre which both offer secure online ordering.