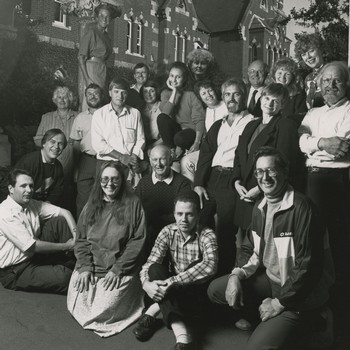 Cantus Choro was formed in 1979. It specialised in music for men's voices, both sacred and secular, ranging from the 16th to the 20th centuries. Cantus Choro has established a fine reputation for its broadcasts for the Australian Broadcasting Corporation and recitals of sacred and secular music. In this recording of women's voices were added to the ensemble.

Peter Chapman - choral conductor, singer and music teacher, achieved renown for his direction of the Choir of Canterbury Fellowship in Melbourne for 25 years. He began his singing career as a boy of eight, later studying at the Melbourne University Conservatorium of Music and at the Royal Academy of Music. While in London, he sang in the BBC Chorus and the choirs of Westminster Abbey and the London Philharmonic. Peter Chapman's enthusiasm and skill as a conductor have inspired countless young musicians, particularly Royal Society of Church Music choristers and students at Scotch College. These recordings with Cantus Choro demonstrate his lively musicianship and his care for phrasing and words.

Norman Kaye - Organist and composer, is equally fluent in English Cathedral and French Symphonic styles of organ playing. A former pupil of the late Dr A.E. Floyd in Melbourne, he also studied in London and in France taking his Premier Prix at the Conservatoire Nationale in Nice. He displays a bold and colorful accompanying style which contributes much to the dramatic impact of these hymns. Norman Kaye is also a noted actor and appears frequently in feature films, television, and on the stages of major theatre companies in Melbourne and Sydney.

Geoffrey Cox (Vol. 3 only) - was born in Queensland, where his early training as an organist was with Robert Boughen at St. John's Cathedral, Brisbane. After graduating in music from the University of Queensland, he became Organ Scholar of New College, Oxford, and subsequently completed doctoral studies at Oxford University. He was currently Organist and Director of Music at St. Peter's Eastern Hill, Melbourne, Senior Lecturer in Music at Australian Catholic University (Victoria), and chairman of the Victorian branch of The Royal School of Church Music. He has performed in many parts of Australia as well as overseas as an organist recitalist. His refined and sensitive approach to accompanying hymns.

Cantus Choro is featured on the following titles