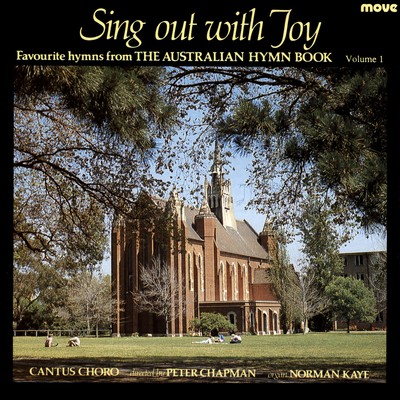 A selection of favourite hymns from the Australian Hymn Book. Including 'All creatures great of our God and King', 'Praise my soul', 'For the beauty of the Earth', 'Immortal, invisible', 'Be thou my vision' and 'Love divine'.

“…The album was recorded in the chapel of Trinity College at Melbourne University with most imaginative organ accompaniment by Norman Kaye, who really demonstrates the versatility of a lovely instrument and a fine musician. More than that, he gives a lead to other musicians as he lets the choir breathe free of accompaniment, the breathing making the moments of accompaniment that much more effective than the usual barrage of full-scale accompaniment that so often dominates rather than supports the singing and the prayer...

...The harmonies are clean and lively — special mention should be made here of the superb tenor work and the beautiful flute-like soprano and descant voices…”

“It is a record which may be listened to with joy! Singing is superb. The pure choral tone is outstanding. Diction is clear, and it is all directed with fine musicianship!”

“For those who like to hear their favourite hymns superbly sung [these] three volumes ... cannot be bettered.”

Sing Out With Joy is available as as CD. It can be purchased online through Buywell Music or the Australian Music Centre which both offer secure online ordering.