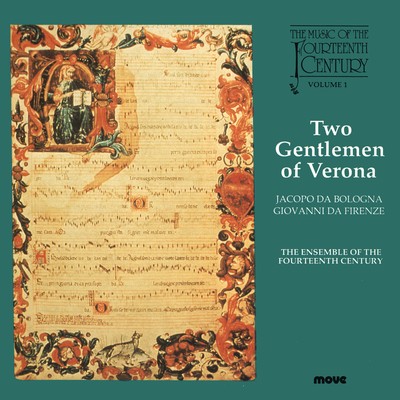 Jacopo da Bologna and Giovanni da Firenze are the most prolific representatives of the first known generation of Italian polyphonic composition. These works were written under the patronage of the della Scala family in Verona and the Visconti family in Milan, and exemplify the "sweetness and intricacy" of their melodies.

“The performances have a fine flow and an impressive clarity ... it has opened my ears ...”

“a satisfying mixture of scholarly research and musical inspiration ... is of particularly good value and worth a listen by the general collector.”

Two Gentlemen of Verona - The Music of the 14th Century Vol. 1 is available for download from the iTunes Music Store.
It's available for streaming through Apple Music.

Two Gentlemen of Verona - The Music of the 14th Century Vol. 1 is available as as CD. It can be purchased online through Buywell Music or the Australian Music Centre which both offer secure online ordering.