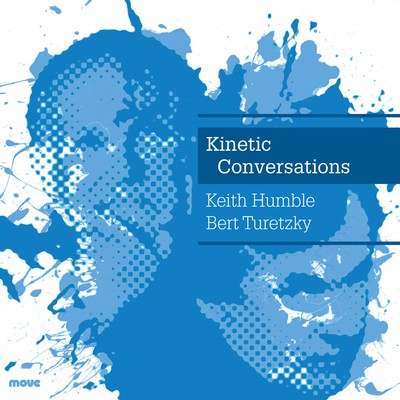 The reputations of Keith Humble and Bert Turetzky go way beyond their status as virtuosos.
We hear two artists with uncommon empathy for one another, who invariably injected high energy and spirit into their music-making. Their spontaneity and sense of form and space makes this music timeless. It is no wonder that among their many other activities in music over many years both gained international reputations as pioneers of new music.

“Kinetic Conversations, is an extraordinary and rare find, a heady 100%-proof concoction distilled once and only in the off-hours of a March afternoon at the University of California, San Diego, in 1986. The opening track We Know Webern, a glistening gem that seems unearthed from the same ground as the glancing blows and bare outlines of Webern’s Six Bagatelles for String Quartet. Though fully improvised, it sounds thoroughly composed, a music of abrupt shifts and razorial edits, snatches and snippets of filigreed condensate, pockets of hockets. Histoire dance, the album’s penultimate track, nods again in Webern’s direction, now to Stravinsky, and his jaunty l’Histoire du Soldat. Stravinsky’s rhythmic pulse is recognisable in the ostinato bounce of Turetzky’s bass, whilst Humble’s wayward hybrid spins a sideward dance, a vodka-sot devilry that miscegenates the original’s tango and ragtime, waltz and march. Bursting out of these two’s unsquared brackets, the music springboards in all directions, wild and unpredictable, reflecting the shared sympathies and stomping grounds of this dynamic duo: jazz, elemental sound, noise, intuition, humour, virtuosity.”

“Keith Humble (1927-1995) distinguished himself as a composer of concert and electro-acoustic music, as a brilliant interpreter of new music and as an educator. This collection of recordings with legendary American contrabassist, Bertram Turetsky, represents another side of Humble’s versatility, namely free improvisation...The opening track, We know Webern is an excellent introduction to the amazing array of timbres, extended techniques and idiomatic gestures that Turetsky has developed for the contrabass. The sparse texture featuring sporadic and melodically angular interplay between piano and contrabass highlights the finesse of Turetsky’s technique...Overall the improvisations for piano and contrabass are more sonically appealing than those involving electronic sounds. The synthesised sounds lack the rich timbral, dynamic and gestural interest of the stunning contrabass playing. Some of the improvisations using piano are also marred by an out-of-tune instrument. It is probably the case that these live recordings were never intended for release but it is a small price to pay for the chance to hear the unique performances of these two remarkable musicians.”

Kinetic Conversations is available as as CD. It can be purchased online through Buywell Music or the Australian Music Centre which both offer secure online ordering.