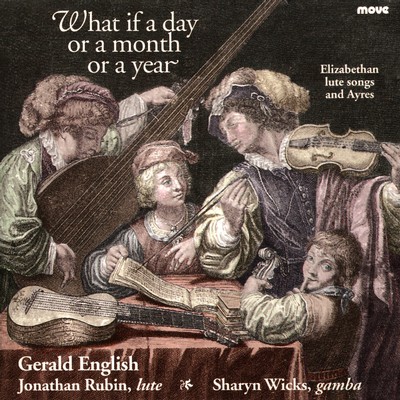 During a career spanning more than forty years, Gerald English has enjoyed success as a performer of operatic and concert repertoire. With Jonathan Rubin (lute) and Sharyn Wicks (gamba) he has created a fascinating and charming disc featuring 400 year old English Ayres by composers Dowland, Campion, Holborne, Ferrabosco and Cutting.

“World acclaimed singer and early music specialist, Gerald English, passed away on 6th February 2019. Born in 1925, he started his singing career as a choirboy, then progressed to fame in opera, concert, early music, as recording artist and academic. His achievements are lengthy and may be traced in an on-line search. This CD is a collection of mainly lute songs by Dowland, Campion, Ferrabosco and Jones, with accompaniment by Jonathan Rubin (lute) and Sharyn Wicks (viola da gamba). It is a broad example of the re-emergence of lute song repertoire in the early music style.”

“As nearly everyone has said already, English’s voice was a highly individual one; in my mind, it couldn’t be mistaken for any other for its note-centredness, impressive rapidity of negotiation, flawless diction, and unabashedly ‘forward’ projection. As you can hear in this British music, nothing is lost or thrown away as incidental; dealing with works of this transparency, the tenor knew the value of every scrap of music. And the most admirable element – one that distinguishes English from his peers – is the lack of ponderousness, self-importance, or ego. I suppose the intention of this re-release was to summon up the memory of a fine singer who gave a good deal to this country through his teaching and the exercise of his skills. We have few enough records of English’s years in Australia; this disc is a happy demonstration of his craft in a field where he shone – not eclipsing his peers, but standing in their front rank.”

“English is at the height of his considerable talent and the singing is superb.”

“Both music and words show that delicacy and powerful delight which is the hallmark of the time.”

“Gerry was a musician’s musician, with extraordinary intellect. I loved his high, clear voice (sometimes disparaged by others as being secondary to his musical skills, or a “comprimario” voice), and was mesmerised by his ability to deliver text so clearly and affectingly. He had the finest diction of any singer I’ve ever heard. What if a Day or a Month or a Year would seem to be a Lazarus with a triple bypass project. It was recorded in 1979 (just after his arrival in Australia, when English was at the height of his vocal powers), and intended for vinyl release. However, it finally emerged not as an LP, but as a CD, in 1995. The collection is terrifically sequenced, in terms of key relationships, emotional journey, and instrumental insertions. The chief joy of this disc though is Gerry, who delivers these songs with such ease, flourish and musicality.”

What if a Day or a Month or a Year is available as as CD. It can be purchased online through Buywell Music or the Australian Music Centre which both offer secure online ordering.