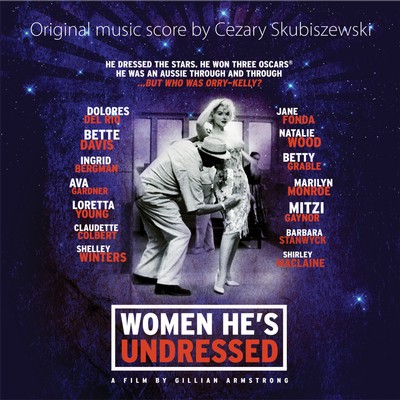 Composer Cezary Skubiszewski writes: "It was a truly enjoyable but also a quite challenging experience to be working with the great film director Gillian Armstrong on such an exciting project as 'Women He's Undressed'.

"The score to the film is a combination of orchestral, choral and 20s and 30s jazz-influenced music and also extensions to existing music used from archival film clips. The orchestral parts were recorded with a small ensemble combining strings and woodwind instruments. The vocal parts were recorded with a solo voice as well as a 12 piece vocal group.

"The extensions needed to capture the sound of the archival music but also be independent compositions. These tracks needed a special mixing process so they would blend well with the sound on the archival film clips.

"To record jazz tracks I assembled a group of fantastic jazz musicians from Melbourne and asked them to play with full energy, reflecting the spirit of 'swinging New York' in the 20s. As the film moves through the life of Orry-Kelly, so does the music. It reflects the changes in time and fashion.

"Towards the end of the film there is a more reflective, contemporary sound, but the final music cue brings back an extended version of the main theme – orchestral, choral and quirky cha cha."

“I go to a late screening of Gillian Armstrong's documentary about legendary costume designer Orry-Kelly titled Women He's Undressed. It's hugely enjoyable, featuring great footage from the golden years of Hollywood. I appreciate the enormous amount of music composed for it by Cezary Skubiszewski. His score is vibrant and beautifully executed – he nails it again.”

— Amanda Brown, Music Industry Inside Out

Women He's Undressed is available as as CD. It can be purchased online through Buywell Music or the Australian Music Centre which both offer secure online ordering.