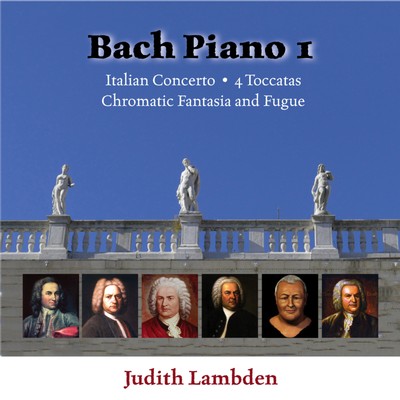 It begins with four of Bach's Toccatas, which are amongst his earliest compositions. They are full of youthful passion and intensity. free and improvisatory. These "touch" pieces from "toccare" to touch, originated in Italy. They would be used to try out a new harpsichord or organ, and also to display the player's brilliance.

The Chromatic Fantasia also has many flourishes, and includes dramatic
recitative-like melodies. The fugue which follows has a chromatic scale in its subject, with contrasting light episodes. It is a formal work and builds up to a magnificent ending.

The Italian Concerto, published by Bach in 1735, is influenced by the style of Italian composers such as Vivaldi. The solo instrument is strong and is complemented by the quieter imitation of a string orchestra. There is a slow Aria-like middle movement, and the two outer movements which are joyous and exuberant, are very much in the Italian spirit.

Judith was born in Creswick, Victoria in Australia, She graduated from the Melbourne University Conservatorium with a B.Mus(Hons) degree. While still in Melbourne for a further seven years, her teachers were Gordon McKeown for piano and John Ingram for theory and composition. She won many prizes and made national broadcast performances for ABC radio.

Bach Piano 1 is available as as CD. It can be purchased online through Buywell Music or the Australian Music Centre which both offer secure online ordering.