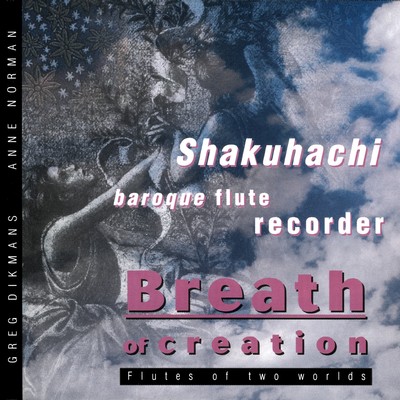 A meeting-point of European and Japanese traditions - 'Breath of Creation' - flutes of two worlds is a journey through traditional folk melodies from England, Ireland and Japan, to the European art music of Bach, Couperin and Vivaldi. Includes stop-offs along the way of eastern meditations and collaborative improvisations by the performers themselves.

Complete with detailed, informative liner notes on the compositions and the place these instruments hold in Eastern & Western culture, 'Breath of Creation' presents an insight into the collaborative creativity of two Australian musicians from two very different worlds.

“The measure of the success of this recording is that it leaves one listening not just to the musical works themselves but to those further and more distant musics of the spheres.”

“I highly recommend this CD to anyone with a penchant for the mystical, the unusual and the unexpected. The performances are first rate.”

Breath of Creation is available as as CD. It can be purchased online through Buywell Music or the Australian Music Centre which both offer secure online ordering.