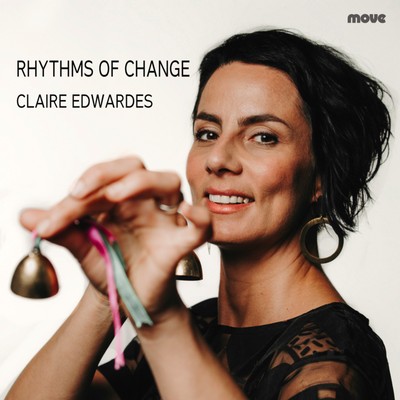 In 2020, Australian musician Claire Edwardes, described recently as 'the wonder woman of percussion' began a movement in her home country. Rhythms of Change is a project that addresses the parity of the representation of women in classical music and specifically in the rarefied world of solo percussion music.

The featured new works on this resulting CD are by a range of esteemed Australian composers from emerging to established and reflect the Australian culture as well as documenting recent national and world events.

Maria Grenfell is a Tasmanian composer originally from New Zealand who has written a huge array of music for the Tasmanian Symphony especially. Her work Stings and Wings is in three movements and was inspired by her work on the film quoll farm with the various movements representing insects - jack jumpers, dragonfly’s and moths.
Peggy Polias is a mid-career composer who was recently part of the Classical Next Innovation Awards nominated Composing Women program at the Sydney Conservatorium of Music. Written during the first outbreak of COVID in Australia in 2020, her new work Receptor is a response to the pandemic, specifically the physicality of the tiny virus entity and all its stages.

Emerging composer Ella Macens wrote her piece Falling Embers during the 2019/2020 Australian bushfires. Tracing a glowing particle suspended above desolate land where all has been lost and destroyed, the piece beautifully explores the last moments of something – the final glow before life burns out.

Edwardes' Rhythms of Change project was triggered by the realisation that basically all the pieces that she had been performing throughout her whole career were all written by men. To re-address the gender disparity, Rhythms of Change commissions female composers to write new works for solo percussion.

As a commissioning and performance project the initiative ensures that the next opus of Australian percussion music will be more fairly represented by women, so that the next generation of musicians can do what makes sense in our day and age – play music written equally by male AND female composers. The works are designed to be performed by a range of musicians – from high school students, to tertiary students through to professionals, with the goal that the compositions will be readily available through the Australian Music Centre and video recordings of the work publicly available on YouTube. It is also envisioned that these high-quality works will be rostered on future exam and conservatorium curriculum not just in Australia, but across the globe.

Edwardes' commissioned works are currently being performed in live concert programs and online concert presentations throughout Australia. Now Claire is taking her project to the world – inspiring all genders of composers and percussionists to band together to forge a new more gender equal chapter in the history of classical music.

Internationally acclaimed percussion soloist, chamber musician and artistic director of Ensemble Offspring, Claire Edwardes has been described by the press as a ‘sorceress of percussion’ performing with ‘spellbinding intensity’ and ‘graceful virtuosity’.

Rhythms of Change is available as as CD. It can be purchased online through Buywell Music or the Australian Music Centre which both offer secure online ordering.