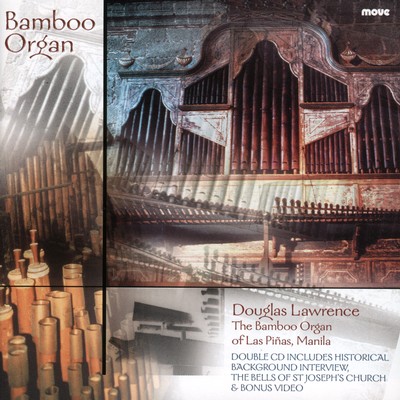 The fascinating story of the organ from its conception by the Spanish missionary Fr. Diego Cera in 1816 through many competent and incompetent repairs and restorations to its complete restoration by German organ builders is related in the programme notes.

Douglas Lawrence interviews Fr. Leo Renier (who was responsible for the restoration of the organ) on a bonus second CD.

“a most interesting CD to listen to ... It should be a MUST in the collections of all organ music lovers.”

“a highly significant release ... a model of informative, beautifully illustrated and thoroughly documented presentation. The album is a delight in every way ... excellent performances by Douglas Lawrence ... a most welcome addition”

“This is a recording that will give great delight to the listener. The music and sound of the organ are charming and captured extremely well ... The playing is stylish, with nice ornamentation, clear articulation and varied registration ... Move and Douglas Lawrence are to be congratulated on a significant achievement.”

“pleasing and sensitive playing ... a most interesting CD to listen to ... It should be a MUST in the collections of all organ music lovers.”

“a most interesting and satisfying production. Well worth adding to your collection.”

Bamboo Organ is available as as CD. It can be purchased online through Buywell Music or the Australian Music Centre which both offer secure online ordering.