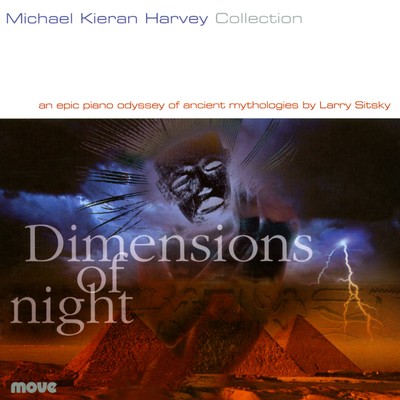 Following the premiere performance late in 2008, music critic Peter Donnelly described the work: "Sitsky is here reflecting on the connectedness of the world's religious mythologies and their frequent exploitation to cause harm to the vulnerable. Beginning with sinuous and winding music depicting Zoroastrianism, the music becomes increasingly violent, edgy and intense. Relief in the form of gentler emotions eventually comes in the 8th section, leading to a purging of evil influences in the utter calm representing the 'tsaddig' shaman figure of the Hasidic Jews in the final section. Michael Kieran Harvey produced playing of amazing virtuosity throughout."

Sometimes demanding for both audience and performer, one is always aware of a powerful musical mind at work.

"Bold programming by the Music Teachers' Association allowed one of Australia's finest pianists, Michael Kieran Harvey, to perform a mammoth cycle of piano pieces by Larry Sitsky, one of our most distinguished and multi-faceted composers. Dimensions of Night explores the spiritual associations of night through a kaleidoscopic series of 10 extremely demanding movements.

"Only a pianist of Harvey's calibre could tackle this work, which requires exceptional stamina and technique, and the ability to see beyond the forest of notes to its spiritual heart. It's tough going and certainly not easy-listening, New Age meditation music. Harvey likes to live dangerously and revelled in the challenge. There was little opportunity to relax in the 75-minute span which evoked imagery from Ancient Egypt to the Kabbalah. Why was Eros, Greek god of love, depicted with such violence while Tezcatlipoca, Aztec God associated with human sacrifice, evoked the most peaceful and dreamy movement, the only one of the set to suggest the Nocturne, quintessential classical form of night music?

"This was one of many puzzles in the music. Sitsky offers no answers, which is perhaps another part of his message. Instead he has constructed an epic work that leaves you thinking about the big questions.”

Dimensions of Night is available as as CD. It can be purchased online through Buywell Music or the Australian Music Centre which both offer secure online ordering.