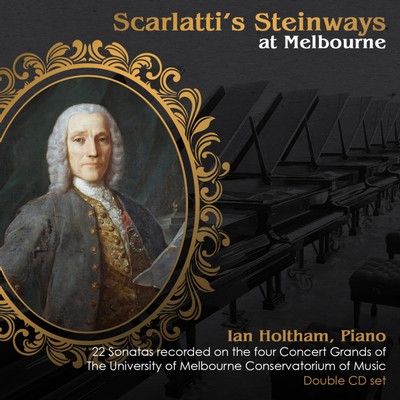 CD-2 begins with six Sonatas around related major tonalities up to four sharps; concluding with five Sonatas (plus one envoi) around the parallel tonic D/b, arguably Scarlatti’s most expressive and varied tonal area.

These four groupings are then assigned to a separate Steinway concert grand corresponding to the tonal and voicing attributes of the four University of Melbourne Conservatorium Steinway Model Ds in ways which most suit the musical characteristics of the four groupings of the Sonatas. These four instruments are the ones in current concert usage in the various performance locations around the stunning Conservatorium building that was opened in 2019.

“Holtham captures well the breath-taking range of Scarlatti’s imagination. He draws us towards redolent Iberian air in the C Major K. 461, peppers us with flamenco guitar-like figuration in the D Major K. 492, and delights us with the piquant discords and novel modulations of the A Minor K. 7. The vitality of rhythmic and melodic invention of the F Minor K. 239 are displayed with complete aplomb. And in all of this Holtham’s crystal-clear articulation, impressive technical prowess, and thoughtful interpretative touches are constantly on display. The final work, the rarely heard D Major K. 435, Holtham gives with dazzling dexterity, and describes in his sleeve note as his envoi.”

“... his playing is brilliant and many of the works featured on the CD are extremely difficult technically, particularly the superb K435 ...”

Scarlatti's Steinways at Melbourne is available as as CD. It can be purchased online through Buywell Music or the Australian Music Centre which both offer secure online ordering.