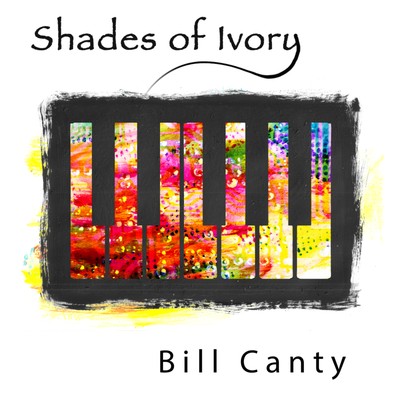 “Shades of Ivory” is, in all likelihood, very different from any other piano album you’ve heard. Bill Canty is a highly accomplished Australian musician who has played in everything from orchestras to rock bands.

Its multi-tracked arrangements and unusual playing techniques are partly responsible for this but what stands out the most is that many of the sounds don’t seem to come from a piano, at least not a normal one. And whilst on that subject: all of the pianos are digital, not acoustic.

Composer and programmer Bill Canty is well aware of what typical piano music is, having played it for nearly fifty years. He’s also very experienced at making music with synthesizers and computers, as well as editing sounds and programming some of his own software. For this album all of these skills were merged into the making of what could be thought of as electronically ‘prepared pianos’.

Some of the sounds were left in their original state, that is, identical to acoustic pianos. But others were edited by Bill to create a wider palette without needing other instruments. Notes were made to start slowly instead of suddenly, or to sustain like an organ, or to flow together smoothly and with vibrato like a wind instrument, and much more.

The very first note of the first track on the album, Fantasia, is low and sustains like an organ pedal note for twenty-five seconds instead of fading away as expected. Soon there are stereo echoes, not automatic but edited, only using selected notes and sometimes changing pace to flow with the music. Many notes resemble soft flutes, and now and then one note at a time bounces from left to right, making it stand out cleanly.

Techniques like these are used throughout the album to add richness and interest to the arrangements, but some pieces, like Sanctuary, venture even further from the norm. Its trills and tremolos are made with sudden pitch changes rather than new notes, simulating bird calls. One of the background sounds is more like magpies than a piano; the edits responsible for it are quite simple in synthesizer terms but they completely transform the familiar piano sound.

Various ideas and influences continue throughout the album: a bouncing ping-pong ball was recorded then its timing analyzed, modified and used for the featured notes in Rebound; stereo random notes in the Dorian mode tinkle from the beginning to the end of Droplets; the thought of slowly sinking to the bottom of the ocean in a mini submarine inspired Immersion. Some of the harmony changes in Fantasia were borrowed from Ravel’s Sonatine, a dim recollection of the beginning of Mike Oldfield’s “Tubular Bells” led to the creation of Thirteens, and the repeated note all the way through Trance is an idea Chopin famously used in his ‘Raindrop’ Prelude.

“Shades of Ivory” is highly crafted and imaginative, full of little surprises for the attentive listener. The twelve five-minute pieces run seamlessly from one to the next by either overlapping or segueing, making a nonstop hour of spacious and atmospheric piano music.

Australian born Bill Canty has spent many years in Melbourne and is currently living in nearby Geelong were he grew up. Bill has extensive experience collaborating with a variety of musical organisations.

“Easy atmospheres ... the emphasis is on atmosphere and the one-word titles leave interpretation very open, as you can see in the following Sanctuary. Canty makes reference to the bellbirds in Kew’s Studley Park and you hear plenty of bird-suggestive sounds; not the multi-coloured flourishes of Messiaen but little two-note oscillations piercing a brooding multi-layered backdrop. ... Each of the suite’s movements lasts about 5 minutes ... it strikes me that this is a music that is not to be subjected to analysis but enjoyed as background to one’s own mental ramblings.”

Shades of Ivory is available as as CD. It can be purchased online through Buywell Music or the Australian Music Centre which both offer secure online ordering.