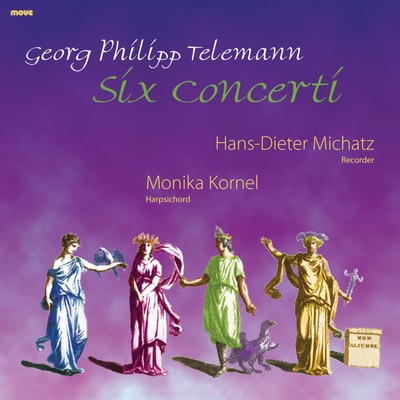 We present this rare recording of his masterly compositions for obbligato keyboard and flute, from the collection of ‘6 Concerti and 6 Suites’.

These pieces have stayed ‘under the radar’ of standard performance repertoire for a long time, and this recording realises them in the attractive combination of recorder and harpsichord.

Telemann’s 6 Concerti employ a large variety of musical forms and a typical mix of national styles and affects, allowing for joyful music making between the equally demanding parts.

“This new recording is a most welcome addition to the growing body of works restoring (Telemann's) fame and prestige to modern listeners. Hans-Dieter Michatz and Monica Kornel have ... a natural affinity for Telemann's music (and each other). Concerto no 2 is especially beguiling, played as it is on a tenor recorder ... in the beautiful and searching opening largo ... there is ample opportunity for tasteful ornamentation that enhances rather than obscures the tune.” ★★★★

“Hans-Dieter and Monika have worked together for a long time and one might say that they have got it right - the harpsichord accompaniment is almost background, affectionately melded to the recorder. It is a very pleasant-listening CD, delightful concerti, and polished in both performance and recording.”

“Michatz’s recorder playing, with his tasteful conception of ornamentation, varied palette of articulations, careful control of dynamics, choice of instruments, and careful attention to ensemble interaction, is a real joy ... Michatz and Kornel provide solid advocacy for Telemann in fair weather and foul, and the programme as a whole casts important new light for me on the varied output of a varied composer.”

“Michatz succeeds in transferring the subtle timbres and liveliness of his traverso playing to the lower recorder types. Harpsichordist Monika Kornel, his longstanding colleague from the ‘Sydney Consort’, complements him in an equal and subtle partnership. Remarkably refined Agogics and Articulation make for true listening pleasure. In the constant search for substantial pieces that can be represented on recorder, this is a convincing discovery, and the listener can fully appreciate the interesting, and emotionally charged music.”

Six Concerti is available as as CD. It can be purchased online through Buywell Music or the Australian Music Centre which both offer secure online ordering.