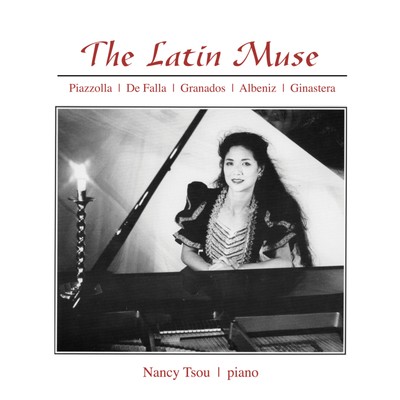 Nancy writes in the liner notes: "The music of Spain and Latin America - scarcely has it begun before we know exactly where it comes from. A few notes and we are transported to the world of fiestas and flamenco, to the high plains and a proud people. We do not need to hear the sound of guitars or castanets, the melodies and harmonies are enough. It is music as crisp and spare as modern architecture, but with a richness of melody and invention not heard since Bach."

Nancy was brought up in the Argentine, and has an uncanny sympathy for the Latin idiom. Each piece has been selected for one quality only – its intensity of feeling. The fire and tenderness of a great repertory, this is what Nancy Tsou conveys.

On this recording, the music has been played on the instrument for which it was composed. Except for the music of Piazzolla. The arrangements for both Oblivion and Milonga del Angel are by Zunini and Cosentino.

“The Latin Muse presents some of the best-known works of five Hispanic composers performed by pianist Nancy Tsou. Nancy spent the early years of her childhood growing up in Argentina, absorbing the ubiquitous Latin music, its wonderful colours, and its free and vibrant spirit. She established a deep and sympathetic connection to the Latin culture and music.”

“It is impossible to praise Nancy Tsou’s playing too highly – accurate, rhythmical and exciting. Many of the works she plays are usually heard being played by musical groups but she loses none of the nuances and, above all, the music is imbued with strongly Hispanic sensitivities.”

The Latin Muse is available as as CD. It can be purchased online through Buywell Music or the Australian Music Centre which both offer secure online ordering.