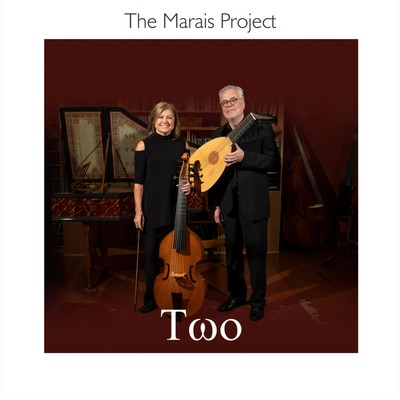 Guest artist, Susie Bishop voice, joins them for a gorgeous encore. The performers wanted to create the feel of a live performance in the way the music flows and the performers interact.

“The theorbo and the baroque guitar have a wonderful solo repertoire spanning hundreds of years” Jenny Eriksson commented, “Less so the gallichon, but Tommie arranged several pieces for this recording including a truly lovely Mozart adagio originally composer for the glass harmonica.” Tommie would like to dedicate his recording of Mozart's Adagio to the memory of recently deceased Swedish soprano, Eva Nässén.

The viola da gamba is also endowed with a rich treasure of solo works. For the first time in her career, Eriksson has performed and now recorded some of her favourite solo pieces, including the world premiere of a work written for her by Australian composer, Paul Cutlan. “Paul and I have known each other for many years and I deeply respect his musicianship. Sarabande is an arrangement of a movement of an earlier suite he wrote for viola da gamba and harpsichord. It is a privilege to bring this music to life for the first time.”

As might be expected, pride of place goes to the music of that giant of the viola da gamba, Marin Marais. “We have explored so many of his suites over the years and there is always a sense of achievement in committing another of the great man’s works to record,” says Eriksson. “Tommie and I know each other so well, and know the music so well, that it just flows from us!"

“The disc is neatly programmed as an alternating set of solos for each player. Andersson begins with Handel’s Sonata for a Musical Clock arranged for the gallichon (a bass lute), but he also plays a guitar suite by Losy von Losinthal and returns to the gallichon with an arrangement of Mozart’s Adagio for glass harmonica. These are all played with great sensitivity (the Mozart is particularly successful, I think). Eriksson’s performance ... is excellent, with a delightfully natural sense of phrasing throughout. The grand finale is a duo performance of a Marin Marais suite in A Major. Splendidly performed and well-programmed, any early-music fan will want this release for certain.” ★★★½

“The highlight of Two is surely the Suite in A major, selections from Book II and IV for viola da gamba and continuo by the master of the gamba, Marin Marais, comprising 7 movements, most of them in dance form. Finally, ‘two’ become three as Susie Bishop joins in an exquisite rendition of a plaintive, anonymously written love song, published 1703, J’avois crû uq’en vous ayment. The contrasting order of the pieces is engaging, alternating the short, bright, punctuated sounds of the plucked instruments with the deep, sonorous bowed tones of the viola da gamba. Simple ornamentation of the era provides interest while double stops weave occasional harmonic textures. Two introduces us to engaging repertoire by important composers of a different time and place. The clever sonic and stylistic pairing of two instruments which are equals yet opposites is a treat.”

“It is a pleasure to hear solo performances from Eriksson and Andersson, most often heard in ensembles such as the Marais Project, as well as the combined forces for the Marais and the final piece. The works selected leave the listener eager to hear more from these performers, composers and instruments.”

“Cutlan wrote his 2014 Spinning Forth suite in four movements for gamba and harpsichord, one of the commissioners being Eriksson. Its third movement, Slow and Sustained – quasi Sarabande, has been rewritten as plain Sarabande. This is one of the recording’s longer tracks – the 2nd most substantial, in fact – and I’m not sure how much rewriting has taken place. ... It’s a stately enough progress, very much in keeping with the other gamba content offered here, with the added charm of discordant intervals. ... Eriksson’s account is full-bodied and sharply etched. When it comes to the Marais compendium, the listener is invited into a world of some gravity; at least, at the start with a Prelude of intense grace and eloquence. ... A sarabande is treated with high distinction, Eriksson’s melody-shaping a pleasure to experience for its supple breadth. But both players treat this brevity with respect and a keen eye for its shape. Most of the gigues I’ve heard from Marais suites come across as fairly sober affairs, but this one is more buoyant and perky (at moments) than you’d expect.”

“Two, featuring viola da gambist Jennifer Eriksson and lutenist Tommie Andersson, was originally planned as a concert for the Marais Project’s 2020 season ... the highlight of the album is Eriksson and Andersson’s arrangement of a suite cannibalised from two works by Marais.”

Suite in A Major Marin Marais

Two is available as as CD. It can be purchased online through Buywell Music or the Australian Music Centre which both offer secure online ordering.