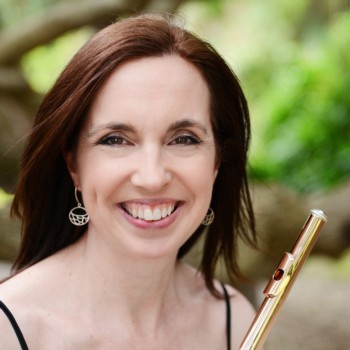 Kathryn has performed at International Arts Festivals in Melbourne, Adelaide, Brisbane, Aberdeen and London, and has toured New Zealand with the Koru Wind Quintet for Chamber Music NZ. She has appeared as a recitalist at the National Flute Association Convention in Washington DC and the Australian Flute Festival. She has been a jury member for the NFA Orchestral Audition Competition in the USA, the Australian Young Artist Competition and the Leslie Barklamb Scholarship.

Kathryn completed her Bachelor and Masters degrees at the University of Melbourne and received a scholarship from the Australian Elizabethan Theatre Trust to undertake postgraduate study with Andreas Blau from the Berlin Philharmonic, Leon Berendse from the Netherlands Philharmonic and Harrie Starreveld at the Amsterdam Conservatorium. She also holds a PhD in Music from the University of Adelaide where she was awarded the Dean's Commendation for Doctoral Thesis Excellence.

Kathryn Moorhead is featured on the following titles