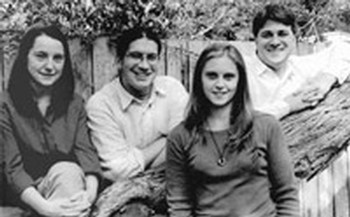 Since its formation in 1995, the Melbourne-based percussion ensemble Woof! has twice performed on ABC Classic FM's ‘Sunday Live’, as well as performance on Melbourne's 3MBS-FM and as part of the University of Melbourne's Lunchtime Concert Series. The ensemble has performed as part of the Musica Viva ‘In Schools’ and ‘Countrywide’ programmes since 1996, presenting concerts in metropolitan Melbourne and regional Victoria and New South Wales. Woof! Also presents its own concert series which has included a number of Australian premieres.

Woof! is featured on the following titles

Matthew Goddard graduated from the Victorian College of the Arts with an Honours Degree in Music Performance and in June 1999 was appointed to his current position as Principal Timpanist in the Tasmanian Symphony Orchestra.

Stephen Hardie graduated from the Victorian College of the Arts with a BA (Hons) in performance, later becoming a casual performer with the Melbourne Symphony. He has also played with the State Orchestra of Victoria, the Melbourne Bach orchestra and the Orchestra of the Melbourne Chorale, along with numerous other freelance engagements.

Tracey Patten completed her music degree with Honours at the Victorian College of the Arts in 1994 and that year recieved various awards including the colleges orchestral prize enabling her to study in Amsterdam at the Sweelinck Conservatorium. She has also been featured on ABC-FM's Young Australia program and performed the Carl Vine Percussion Concerto with the Geminiani Chamber Orchestra.