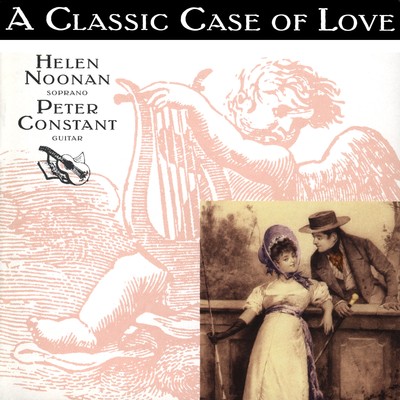 A 'Classic Case of Love' is a collection of intimate, embracing, exquisite and well-known melodies crossing many centuries expressing in all its variety the many flavours and colours of the experience of love — love lost, love yearned for, love savoured, experienced and won.

Divas and prima donnas have featured largely - and loudly - in Helen Noonan's performing life over the last few years, having performed the role of Carlotta in 'The Phantom of the Opera' over 1000 times and the Ghost of Opera in Chamber Made's internationally acclaimed production of Recital, Helen conceived this CD in reaction to these flamboyant and colourful diva roles; in her own words, "Its time to be gentle, time to sing love songs."

The CD features classic songs from great composers of centuries past — Dowland, Vivaldi, Schubert, to timeless folk songs, to the twentieth century masterpieces of Satie, Weill, Villa-Lobos and Lennon and McCartney. Pieces including 'Waly, waly', 'Salley Gardens', 'Yesterday', 'As Time Goes By' and 'Halcyon' by Australian composer, Christine McCombe.

Guitar accompaniment by Peter Constant, one of the new breed of fine Australian guitarists, and the fine acoustics at the ABC Southbank Studios (produced by Paul Petran) lend an intimate and appealing atmosphere to this superb disc.

“This pleasant collection of love songs is delightfully presented by two distinguished artists... Happily, the recording captures the sense of intimacy so essential to the expression of these songs thus making for a disc of light and diverting gems.”

“Helen Noonan, partnered impeccably by guitarist Peter Constant, presents a wide ranging and soothing slice of repertory with consistent aplomb. ... A thorough going joy for the laid back warmth which it consistently generates: soothing as it is, however, it sustains interest primarily on the strength of the obvious empathy of both performers with their wide-ranging repertory combined with the impeccable interplay of their partnership. ... Impeccably presented ... Delicate music making at its best, tailor made for languid listening in the drowsy heat of a summer's day. ... The wash of exquisite sound is irresistible.”

A Classic Case of Love is available as as CD. It can be purchased online through Buywell Music or the Australian Music Centre which both offer secure online ordering.