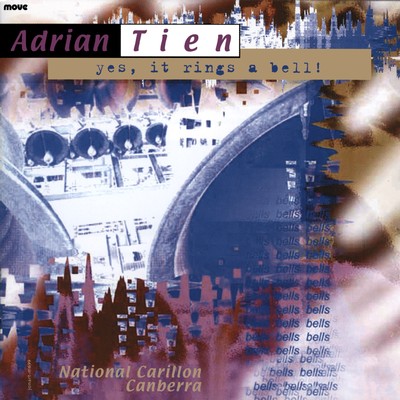 Adrian Tien is probably Australia's best young carillonist. The Dutch carillon magazine "Klok en Klapel" said about his performance in the International Carillon Competition: "The first prize was awarded to Adrian Tien. Powerful playing, according to the jury ... Without doubt this carillonist has a brilliant carillon career in front of him."

Australia's National Carillon was given as gift from the British Government to the people of Australia in 1972, and it contains fifty-three bells, the largest weighing over six tonnes. Adrien Tien takes the carillon through its paces with a beautifully varied programme including Bach, Gershwin, and music from today's finest carillon composers.

“a program of wide musical interest, and the excellently engineered recording captures with great fidelity the sound of the carilon .. this disc has special interest both for those who enjoy its unique tonal qualities as well as for its Canberra associations.”

“If CDs ever wore out .. the CD ... would be long gone ... It is, without question, the best CD of carillon playing I have ever heard ... absolutely superb.”

“a rare opportunity to show the versatility of the instrument.”

“a completely different type of musical experience ... certainly an interesting addition to the collection.”

“this innovative recording by Move will not disappoint.”

“the bells of the carillon create the perfect atmosphere ... it is a recording that demonstrates the versatility of the instrument ...”

Yes, it rings a bell! is available as as CD. It can be purchased online through Buywell Music or the Australian Music Centre which both offer secure online ordering.