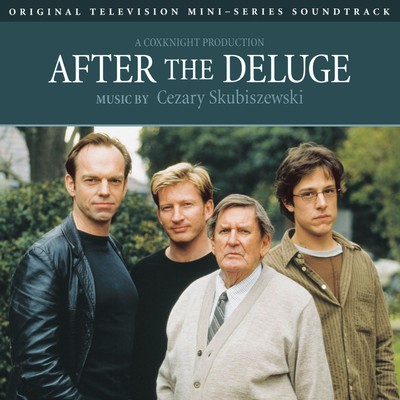 Winner of Best Soundtrack at the 2003 Screen Music Awards!

After the Deluge is the soundtrack to the acclaimed mini-series on Network 10 (featuring David Wenham, Hugo Weaving, Samuel Johnson, Aden Young, Rachel Griffiths and Ray Barrett), by award-winning Australian film composer, Cezary Skubiszewski - of La Spagnola, Bootmen and Two Hands fame. Richly scored for full orchestra and choir, the music effortlessly moves from haunting violin solos, to 40s jazz, Irish airs and the original pop music of the on-screen band featuring one of the main characters.

"I didn't want After the Deluge to be just like a normal rock 'n' roll sort of track, because you see that a lot and it just ends up like a bunch of backing tracks ... So I had to create a very specific sound for the film and I think it's quite understated but definitely there."
(Cezary Skubiszewski on his music for After the Deluge, from a Sunday Herald Sun interview)

The story of After the Deluge weaves together the lives of four ordinary men at a critical time in their family history. The patriarch, Cliff, is suffering from Alzheimer's and has begun to live in his past. As his three estranged sons - Alex, Martin and Toby - reluctantly draw together to find institutional care for him, Cliff wrestles with the demons of his past. Buried memories of the Second World War percolate disturbingly through the mundane reality of his daily care.

Much of the story is told from Cliff's point of view in a febrile world where only the audience can piece together the reality of his life and understand the extent of his sacrifice. Against this background are woven the modern day stories of Cliff's sons as they in turn struggle to come to terms with the roles they have played as brothers, sons and men.

In the end, when the war of words quietens, it is music which offers a respite from the old resentments, and music which eventually reconciles the brothers to the loss of a man they could never be good enough for. Because of this, Cezary's soundtrack is unusually important and prominent throughout this four-hour drama - a rarity in music for television.

As is the custom of Move soundtrack CDs, this release includes a comprehensive 16-page booklet featuring a complete synopsis, details of how each track relates to the visuals, production stills and shots from the orchestral recording sessions in Melbourne. At over 60 minutes in length, this CD is a true collector's item worthy of a very special television event!

The mini-series itself is now available on DVD from all leading retailers (courtesy of MadMan / AVChannel) and amongst its many special features is a section on the soundtrack and interview with the composer.

“a standalone soundtrack that comes across as perfectly cohesive despite its multifaceted elements ... Cezary Skubiszewski was inspired ... his finest soundtrack ... right up there with the best cinema soundtracks I've heard this year.”

After the Deluge (Original Soundtrack) is available for download from the iTunes Music Store.
It's available for streaming through Spotify and Apple Music.

After the Deluge (Original Soundtrack) is available as as CD. It can be purchased online through Buywell Music or the Australian Music Centre which both offer secure online ordering.