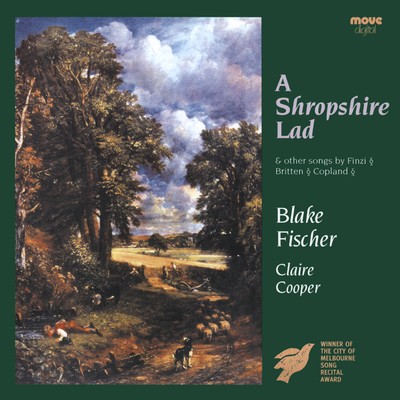 A truly successful recital is not a collection of songs shunted together like a string of ill-matched freight cars. Given true commitment, atmosphere and concentration by artists such as the award winning baritone Blake Fischer and pianist Claire Cooper, it can take you on both a dramatic and emotional journey.

In "A Shropshire Lad", Fischer (winner of the prestigious 1998 Song Recital Award) and Cooper embark on a journey through the musical countryside of English and American folk, traditional and art songs, with music by Butterworth, Finzi, Copland and Britten.

Move Records has produced five recital CDs of the Song Recital Award winners (as part of its major sponsorship of the competition), and is proud to continue its association with the award going into the new millennium.

“all presented knowingly and with superb diction ... I would hope to hear more from Fischer in the next few years ... Sound is excellent.”

A Shropshire Lad is available as as CD. It can be purchased online through Buywell Music or the Australian Music Centre which both offer secure online ordering.