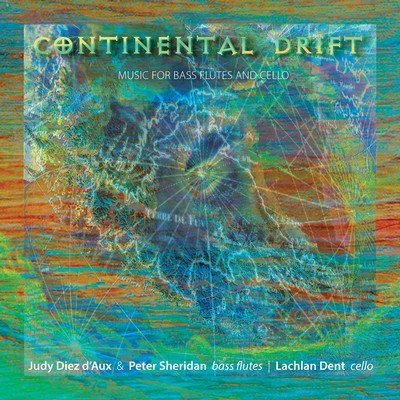 This exciting album captures world premieres from four different continents: Australia/Oceania, Asia, North America and Europe. These lyrical and rhythmic pieces are sure to inspire your musical imagination and enlighten your soul.

The score of "Fantasies and Wildness" by Brennan Keats is available from Wirripang – http://www.australiancomposers.com.au/authors/brennan-keats?Page=2&Items=12

“No matter how obscure you think a particular combination of instruments may be, or how much you wonder if anyone could possibly be interested in it, when you express your reservations, you can be stunned by the chorus of enthusiastic affirmation that rises from the throats of a host of aficionados and fans, demanding to know how you can possibly question the appeal of said combination. Here is a CD from the innovative Melbourne label that features, for the most part, original compositions for the bass flute – or, better still, two of them; in this instance, the duet is sometimes supported by a cello underpinning and, for good measure, all three participants enjoy solos.

I’ve known (and worked with) a few flautists and, while they have all been happiest with the normal Middle C-based instrument and can enjoy for limited periods a stint on the alto species, not one of them made much of a case for the bass. Not surprising, really, when you compare the repertoire available across the three-level spectrum; while the alto has been put to striking use by 20th century masters, the lower-pitched instrument is a rare sight in orchestral ranks and never emerges from the shadows for a solo, except during a Master’s all-in recital, perhaps.

Peter Sheridan, the American flautist now resident in Australia, has done more than most performers to commission and promote music for the bass flute. Here, in collaboration with fellow-countrywoman Judy Diez d’Aux and Melbourne cellist Lachlan Dent, Sheridan presents a series of works, some of them slight while others are fairly substantial, most of them written in the last few years. As bookends, the musicians play some Haydn: the outer movements of the first London Trio in C as an ice-breaker, and the opening to the G Major Trio No. 3 to finish. The benefit of these transcriptions, at the start in particular, is to give some context for the timbral interplay at work, acclimatising the listener to the breathy wind texture, initially reminiscent of some of the less assertive flute organ stops.

A fair amount of what is enclosed by these brisk, mildly spirited Haydn pieces comes from America, starting with Gary Schocker’s Underwater Flowers of 2014: an impressionistic triptych for bass flute duet suggestive of Debussy in chamber aquatic mode, at its most original in the middle Flower Hat Jelly which inserts some jauntiness to animate the work’s undulating fluidity. From Quebec’s Ella Louise Allaire/Martin Lord Ferguson partnership comes a 2015 diptych, Spring Awaking, which employs the cello as well. It was hard to see much difference between the initial awaking and the pendant awakened segments, mainly because the writing style remained uniform; easy listening, certainly, with a penchant for unison and octave work but leavened with some sequences that bordered on the banal.

Sheridan’s solo, Doggerel by New Zealand writer Eve de Castro-Robinson, brought to the fore some interest in terms of sound production with plenty of initial plosives, a few passages that featured harmonics, some bent-note mini-glissandi, and what sounded like a dash or two of multiphonics. As the piece progressed, a jig-type rhythm became more and more clear, helping to reinforce the relevance of the work’s title, I suppose. Still, it made a fine vehicle for Sheridan’s skill, particularly an impressive breath-recovery rate. Madelyn Byrne, the computer music expert from California’s Palomar College, produced Suite in Sea three years ago and it presented as the most harmonically daring work so far on this CD. Suggestive of the marine, but not as predictable as Schocker’s Flowers, the middle Soliloquy for solo flute and the following Sea Spirits for flute duet revealed a well-harnessed lyricism and atmospheric eloquence, although the concluding Argentinian Ghost Tango for all three musicians intrigued for its out-of-left-field context and its use of Dent’s cello as a rhythm bass that eventually moved into an independent line of its own.

Dent makes a fine case for Stuart Greenbaum’s Lunar Orbit, a solo that depicts simultaneously two aspects of the 1969 Apollo 11 mission: Armstrong and Aldrin sleeping in the landing module while Collins has to orbit the Moon by himself. The composer makes uncomplicated pictorial suggestions with deliberately limited material but this was, so far, the most sustained piece of composition on the disc; not that at 5 1/2 minutes you are being intellectually stretched, but it makes its case with cogency and comes to an ardent and persuasive conclusion.

Peter Senchuk, Canadian/American in background, wrote the CD’s title piece last year. Another triptych, this score employs the flutes only and is very agreably constructed for them in a kind of fast-slow-fast format, both Diez d’Aux and Sheridan revealing a fine responsiveness to its emotional climate. Not that the work over-stretches these players and the rhythmic interplay in its opening Divergent movement holds no terrors. The central Slipping segment involves a good deal of luxuriant paired work where the lines move uniformly rather than showing much disjunction; the final Convergent pages offer a tad more complexity but not the ‘flutes frantically dance’ activity level proposed in the cover-notes.

Australian composer Brennan Keats’ Fantasies and Wilderness, yet another triptych, also employs all three executants. Its inspiration is Ireland: a nostalgia for the land itself, the sadness caused by young men leaving for war, and the sublimated depression generated by migration, in this case to the United States. Keats uses a conservative harmonic language, which is effective enough in the opening section with its mournful summoning-up of some Celtic twilight. In the middle pages, he quotes Danny Boy in an unabashedly euphonious arrangement, although the context calls out for something less humdrum; possibly the folksong Fil, fil o run o? The last part also uses a well-worn quote – When Irish Eyes Are Smiling – which turns minor to suggest migrant struggles in America and the widespread social disharmony that prevailed, but then returns in full sentimental strength, although the work ends in something approaching depression.

Yuko Uebayashi’s Le vent a travers les ruines is Diez d’Aux’s solo. Full of pauses and couched in an aphoristic, slow-moving limited language, the composer’s ruins are not menacing – just deserted, offering little opposition or challenge to the placid wind that blows through them. Its later stages offer a fine exploration of the instrument’s lower register as its moves to a calm, understated conclusion. Stanley M. Hoffman’s Arirang Variations began as a piano solo, the composer arranging it last year for Sheridan’s use. Another work for the two flutes, it takes a Korean melody and offers four variations on it, the original tune announced at either end of the work. This is intended for young players, to give them some intellectual impetus and to improve their skills; needless to say, these players handle it with aplomb and the sort of polish that would be the admiration of any player at any age.

Oddly enough, the more you hear of these pieces, the more intriguing the combination sounds. At moments, Dent’s cello is unexpectedly dominant; at others, the variety of attack makes the organ-flute stop comparison invalid, chiefly because in this situation we are dealing with two distinct lines played by well-matched but not identical individuals. Still, at the end, you feel that the mysteries of the bass flute have been well-expounded, if not exactly exhausted.”

“It is simply lovely. Peter and Judy, your recording of my 'Arirang Variations' is just as I imagined the piece sounding. Thank you so much for your beautiful performance. Martin, I truly am grateful for all that you do at Move Records.”

Brennan Keats OAM was born in Mosman, NSW, the son of the composer, Horace Keats and the broadcaster and recitalist, Barbara Russell.

Continental Drift is available as as CD. It can be purchased online through Buywell Music or the Australian Music Centre which both offer secure online ordering.