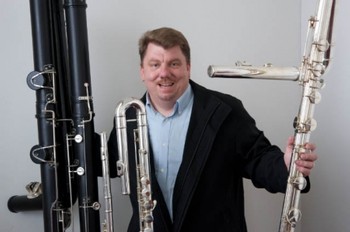 He has recorded Hollywood soundtracks and has been a recipient of awards from Mannes College, University of Arizona, Aspen Music Festival, Ottorino Respighi Festival (Italy), American Composers Forum, and Santa Monica College.

A native of New York City, Peter has performed and taught in America, England and Australia. He has been a faculty member of numerous music faculties in Los Angeles and was a founding member of the Los Angeles Flute Quartet. He is now a Teaching Associate at Monash University, and a woodwinds instructor and band director at Donvale Christian College and Mazenod College in Australia.

He is an active soloist and chamber musician and his flutes can be heard on Albany, Innova, Warner Music Latina, Varese Sarabande and Move record labels.

Peter Sheridan is featured on the following titles