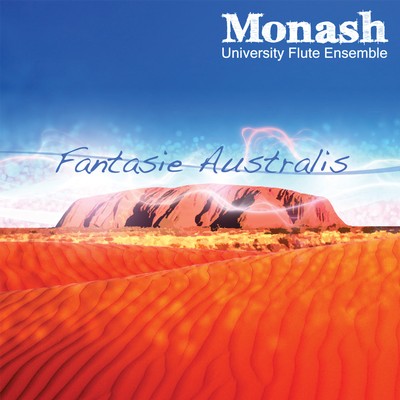 A strong growing interest in the extended flute ensemble is taking place here in Australia and worldwide, as multi-award winning composers are exploring and investigating the sonic possibilities of the extended flute family with fresh ears. This album displays a variety of musical styles from driving rhythmic pieces to works based around pure lyricism and improvisation. These imaginative creations can take the listener on a journey into the Australian landscape, to explore the wild bird-calls, the driving the waves, and the howling southern winds of a land as old as time. Australia is a land filled with natural sounds that can permeate the psyche and open new thoughts of sonic possibilities.

This recording provides both student performers and composers the opportunity to experience, and publicise their musical training and aptitudes on the international stage. It is our vision that this CD will inspire new generations of composers and performers to explore the traditional sounds of the Western flute, as well as showcase the abilities of the power and sensitivity of the entire flute family.

“Rarely does a recording come close to this level of eclecticism. And yet, with the eight rich octaves provided by the sub contrabass to piccolo … this compilation of Australian works explores its own innate eclecticism with such musicality that it is impossible not to be wooed by it.” ★★★★½

“Full credit to Monash Uni. emsemble for a top recording. This is a collection of the most recent and exciting flute music. The inclusion of all the biggest members of the flute family creates an enormous sound with a depth and feel of bass that is now changing the sound of flute group playing and public perception of flute sound. Credit is due to Peter Sheridan for commissioning many of these works and collecting them for us all to hear. We owe him thanks too for his inspired work with the students at Monash...Fantasie Australis the CD is a credit to all involved. I can’t wait to see what next year’s group of talent provides.”

“While there is some variability in compositional quality, all the performances are clearly first-class. I highly recommend this CD for the flute choir section of your library.”

Fantasie Australis is available as as CD. It can be purchased online through Buywell Music or the Australian Music Centre which both offer secure online ordering.