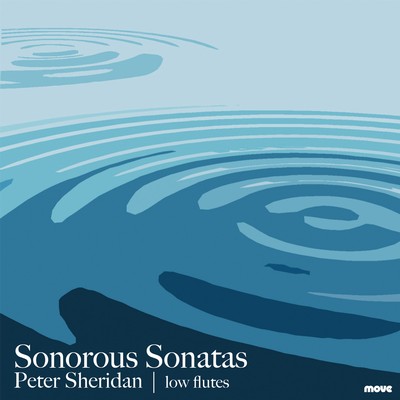 For many flutists, holding an alto or bass flute up for more than a few minutes can be rather difficult and challenging. There are new designs to assist in this physical impediment and one only hopes that new players, both young and old, will begin their journey of exploration with the low flutes; not allowing any physical restraints to impede their enjoyment of a whole new world of flute sounds.

These giant flutes are capable of sustaining our musical interest and attention for more than the standard three to five minute compositions. Peter says: "sound waves become quite interesting and complex the closer they approach the limits of human hearing (20,000 Hz – 16 Hz). It is these extreme frequencies I wish to introduce or re-invite into your musical ear and library."

These compositions create a sonorous world worthy of full attentive listening, and will intrigue and excite your aural senses. To create sounds that have shape, duration, intensity and colour is nothing short of miraculous. And to notate these sounds and reproduce them long after their first creation is certainly special to the study and performance of art music.

Sound floats for long periods of time in the brain and inner ear; far after the vibrations cease to exist in the actual air ... the ‘Sonorous Effect’.

As ripples on a pond carry energy across the smooth surface of the water, so does musical sound. Vibrations resonate around our minds, our planet and even throughout the galaxy!

“A beautiful selection of music by many wonderful artists including the talented Mr Peter Sheridan, taking your ears on a magical, sonorous journey enhanced by the deep resonance of the low flutes and substantial sonatas.” ★★★★★

“Mr Sheridan and co have brought together a wonderful sequence of pieces which draws you into a beautiful journey with highs and lows. Ultimately lifting the spirit and leaving you pleasently surprised.” ★★★★★

“the instruments are new and thrilling [like a] Suess-ianly delight...”

“The prime mover of all this exposition of the flute in all its forms is Melbourne based academic and flute enthusiast Peter Sheridan. The two CDs are in fact very different. While Sonorous Sonatas is a recording of Peter Sheridan playing low flutes in duets with piano, alto flute and piccolo, Fantasie Australis is a CD of large-scale pieces for the full Monash University Flute Ensemble often including twenty-one flautists. Peter Sheridan established this flute ensemble in 2010 and it has paved the way for many flautists and composers to explore the sonic possibilities of the extended flute family.

Sonorous Sonatas is available as as CD. It can be purchased online through Buywell Music or the Australian Music Centre which both offer secure online ordering.