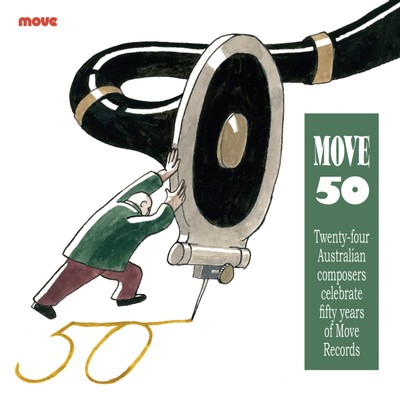 15 of the works are performed by pianist extraordinaire Michael Kieran Harvey.

For 50 years Move Records has been supporting Australian classical and jazz composers and musicians. Move 50 is a landmark CD featuring twenty-four Australian composers who contributed mostly original works to mark the occasion. The booklet includes brief commentary from each of the composers.

On the back cover of the booklet a poetic tribute from Arjun von Caemmerer sums up just some of the commitment Move Records has shown to the Australian Music Industry.

Move 50 will appeal to those listeners who appreciate both standard and experimental classical and jazz compositions. The talent and variety of music is immense, offering broad appeal.

“Music lovers are aware that by now contemporary music is no longer as 'difficult' or atonal as it became in the mid-late 20th century. Today, styles labeled (mainly for convenience) as post-impressionist or post-minimalist utilise tonal harmony, and are primarily studies in texture designed to delight the ear. There are many such pieces here. The bulk of the works are for solo piano, all performed with great sensitivity by Michael Kieran Harvey. If he is not the unsung hero of Australian music, he's definitely under-sung – but not by Move Records, who have produced over two dozen CDs with this remarkable composer/pianist. Harvey's own piece for prepared piano (Keen), marries musical argument to sonic experimentation. To close, we have a brief track from an earlier disc: Julian Yu's very witty variation on Happy Birthday for clarinet and string quartet. It strikes just the right note to end this terrific celebratory collection.” ★★★★

“In 2018, Move Records celebrated 50 years in operation, bringing Australian music to the forefront of its enterprises across the decades. I’m sure it hasn’t been plain sailing throughout every stretch of the journey and it can’t be a promising panorama if you survey the current recording scene where so much is available through so many different forms of media. As an appropriate observance of its half-century, the company produced this CD that comprises 24 tracks of works by Australian composers, ranging in length from the 59 seconds of Andrea Keller‘s Deep Blue to Paul Moulatlet‘s Dark Star which persists for 7′53″. Most of the performers are well-known names; ditto, the composers. Further, quite a number of the works have been specifically composed to honour the Move label and its milestone, with a few directed in praise of Martin Wright who was one of the original founders and has been a producer and engineer on countless Move products.”

“Australia's favourite homegrown label turns 50 with new birthday. 24 Australian composers were invited to contribute a short work, and this commemorative release is the result. Highlights include ' A Memory on the Move' by Ron Nagorcka, on which piano and didgeridoo intertwine to great effect. Ros Bandt's mysterious and evocative 'Mystic Morn' is an understated gem beautifully performed by Gabriella Smart. Soprano Merlyn Quaife gives a knock-out performance of 'Sonnet After John Keats' by Gordon Kerry. 'Postlude' is a wonderful inclusion of computer music from Warren Burt. 'Northcote Days' is a piano duet performed by the composer Linda Kouvaras with Deviani Segal that produces a series of dense, exuberant textures. The recording is rich and reverent ... 'Move 50' is a fascinating, historically informed snapshot of the artists that have been involved with Move and are still in a position to create new works.” ★★★½

“There is a veritable feast of music across the twenty-four tracks and it is impossible within a review to do justice to them all. Harvey’s Keen differs markedly from his previous compositions. Here the pitches stem from the letters B-A-C-H and are finally ‘resolved by a chord incorporating all twelve tones’ as with the subject of Bach’s 24th fugue in the Well-Tempered Clavier, Book 1. The full and changing colour of each and every sound is allowed its own space and time as the intensity of the piece as a unified whole increases. There is an unsettled sense in this wailing, the slow pacing of the tones and the increasing loudness that is, however, in many ways resolved with the exuberance of the final arpeggio. Fabulous! Paul Moulatlet’s Dark Star written for bass flute and performed by Peter Sheridan ... providing freedom within the score for Sheridan to take his own creative path. There is a haunting sense of searching here, with great poignancy shaped in the openness and depth of tones available on the instrument. Sheridan’s technique and expressiveness are superb. There is so much more from Andrea Keller, Andrián Pertout, Tony Gould, Linda Kouvaras, Kanako Okamoto, Julian Yu and many others. This is an important CD celebrating Martin Wright’s collaboration with, and advocacy for remarkable Australian composers, some of whom may not have had such a forum for their work without Move Records.”

Tasmanian born composer Simon Barber studied composition with Don Kay in the mid to late 90s at the Tasmanian Conservatorium of Music in Hobart before relocating to Berlin in 2002.

Move 50 is available as as CD. It can be purchased online through Buywell Music or the Australian Music Centre which both offer secure online ordering.