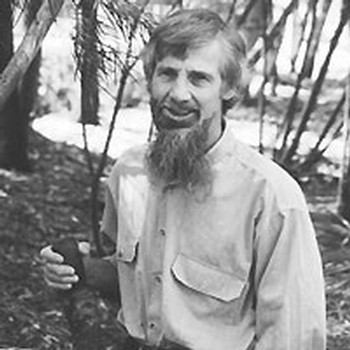 Composer, performer, and naturalist Ron Nagorcka (born 1948) spent his childhood exploring music and the natural world on a sheep farm in Western Victoria. He went on to study at Melbourne University with Keith Humble and Ian Bonighton, and at the University of California San Diego.

During the 1970s he was active as a composer in Melbourne with a prominent role in avant-garde musical activities and taught at the Melbourne State College. He has toured Europe, the USA and Japan on various occasions.

In 1988 he moved to a remote forest in northern Tasmania, where he has built his own house and solar-powered studio. He has a long-held interest in the sounds of the Australian bush (in particular its birds), the use of electronics in music and the system of tuning known as just intonation. His recordings of nature in Tasmania and in the arid zones of mainland Australia provide the basis for many of his compositions. He also makes and plays his own didjeridus - an instrument which has influenced his approach to composition from the beginning of his career.

From 1990-6 Nagorcka's music was performed mostly by the ensemble NYET - a group of artists particularly interested in their relationship to the Tasmanian environment.

In October 1997, he was joined by Robert Williams and Larry Polansky in a concert as part of the "Sounding Sphere" festival in Harima, Japan - and the music prepared for that concert forms the basis of this CD.

In October 1998, his Tasmanian Toccata for didjeridu, sampler and pipe organ was the main feature of three concerts to open the new organ in the chapel of Trinity College in Melbourne.

In 1999 he was awarded a commendation by Melbourne University in the Albert H. Maggs Composition Award. In August - September 1999, he undertook a "Wilderness Residency" at Eddystone Pt. where he wrote This Beauteous Wicked Place - premiered in Ballarat in January 2000, and presented in the Great Hall of the Old Bailey by Nagorcka and Elizabeth Anderson as part of the 2001 London Festival.

Ron Nagorcka is featured on the following titles