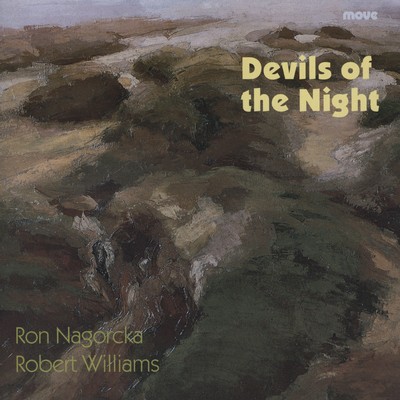 Ron Nagorcka is not only a didjeridu virtuoso, but is one of Tasmania's most important and distinctive contemporary composers. Armed with his digital sampler, Nagorcka is able to not only draw upon the sounds of the local wildlife and countryside but combine them with extraordinary electronic manipulation and Pythagorean just intonation.

The gorgeous cover and backcard artwork is by the acclaimed Tasmanian artist, Philip Wolfhagen.

From the many Nagorcka / Williams didjeridu and sampler collaborations, to Elizabeth Anderson's harpsichord in Zygodactyl Dance, and Larry Polansky's electric guitar in Mood from Lake Mungo, Devils of the Night will provide an evening of listening you won't easily forget.

Robert Williams has a long standing involvement with the performance and promotion of contemporary Australian music.His busy artistic life includes the co-ordination and direction of music festivals such as the Great Southern Sounds Festiva held at the National Gallery of Victoria (1995 / 6), working as a music journalist and critic, and restoring and rebuilding pianos.

“sensuous rather than cerebral ... most rewarding ... the disc is strongly recommended.”

“... wondrous ... the most Tasmanian [non-indigenous] music I have ever heard”

“... wonderful in the balancing of ecological sources and musical structures. Nagorcka has a very sensitive ear for nature ...”

“a variety of nocturnal fantasies ... The constant and delightful thread of sounds weaving throughout this CD is the representation of animal, bird and environmental sounds. They keep the heart of the land always at the forefront of attention.”

Larry Polansky is a composer, theorist, performer, software designer, teacher, writer, editor and publisher from New Hampshire, USA. He is the founder and co-director of Frog Peak Music (A Composers' Collective).

Devils of the Night is available as as CD. It can be purchased online through Buywell Music or the Australian Music Centre which both offer secure online ordering.