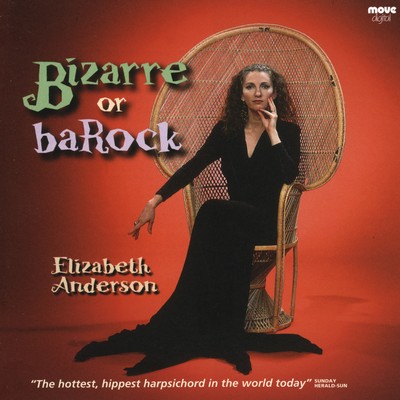 'Barock' is a German word which originally meant 'bizarre'. It was not until early in the 20th century that the word 'Barock' was used in Germany to describe the music of Bach's time.

When Sir Charles Burney first used it in his German Tour diary (1733), he explained that it meant 'coarse and uncouth', much as writers then used the word 'Gothic'. In architecture, the word 'Barock' was applied from about 1867 to the highly-decorated style of the 17th and 18th centuries in Austria and Germany. Therefore, to apply the term Baroque (French/English spelling) with all its shades of meaning is to extend the boundaries of Baroque music far beyond the dates which have traditionally been set for it.

After the release of the highly acclaimed Goldberg Variations (Soundscapes Editor's Choice, November 1996) and highly successful European and Japanese tours, Anderson said: "I felt like doing something WILD!"

A second volume is now available, and it's even more bizarre: More Bizarre or baRock

“Elizabeth Anderson's harpsichord extravaganza should be a candidate for best Australian CD of 1997 ... It all tastes delicious.”

“There is not a weak point on the disc.”

“I was very glad to make the acquaintance of harpsichordist Anderson, who has four previous CDs on the Move label to her credit, including a recording of Bach’s Goldberg Variations. This is highly proficient, no-nonsense playing that is guaranteed to get your fingers a snappin’ and your toes a tappin’. She plays a terrific-sounding harpsichord (maker unknown) that manages to hold its own in the ensemble numbers with drums and bass...it certainly helps that she is one hell of a harpsichordist. The recorded sound is visceral and real – much of the delight in listening to this CD comes from the sheer impact of the sound. I never thought I’d use the word “visceral” to describe a harpsichord recording, but there it is. What fun-a candidate for this year’s Want List for sure.”

Bizarre or baRock is available as as CD. It can be purchased online through Buywell Music or the Australian Music Centre which both offer secure online ordering.