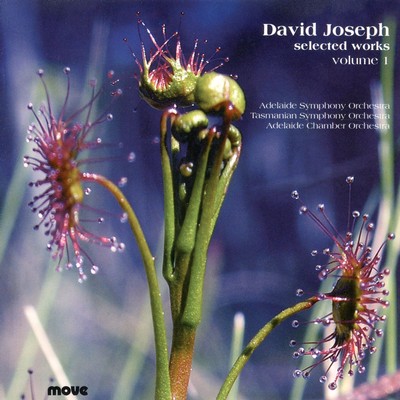 The Adelaide Symphony Orchestra was founded as a 17 player radio ensemble in 1936 and performed its first series of public concerts in 1937. Mr William Cade, an Adelaide born musician who had worked in London with Sir Thomas Beecham, was the orchestra's first conductor.

“The intriguing music of Australian composer David Joseph is restless and uncompromising. The swirling, scurrying clusters of sounds and constantly shifting textures gives these works an elusive, evanescent quality that both fascinates and frustrates.” ★★★

“The music on this disc reveals Joseph as a creative colourist whose technical command of orchestration allows him to vary timbre and texture to good effect. images (1984) and The Drum, a 1985 commission from the Australian Chamber Orchestra, are intriguing and attractive soundscapes that contrast with the bleak and remorseless Symphony for Organ and Strings (1990). The 1989 Clarinet Concerto written for Nigel Sabin (who plays here with the Tasmanian Symphony), with its minimalist allusions, is a thoroughly modern tour-de-force.”

David Joseph Selected Works, Volume 1 is available as as CD. It can be purchased online through Buywell Music or the Australian Music Centre which both offer secure online ordering.